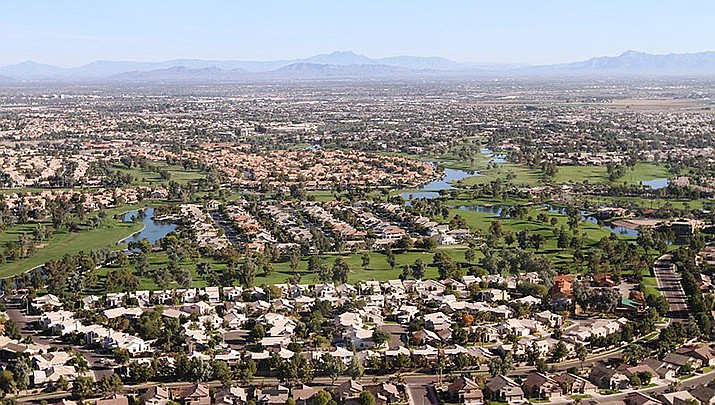 Chandler is eyeing a proposal that would make it more difficult for new data centers to open in the city. (Photo by Chandlernews, cc-by-sa-4.0, https://bit.ly/3daG3SZ)

CHANDLER - Chandler is eyeing a proposal that would make it more difficult for new data centers to open in the city. Data centers that house computer and network infrastructure often supporting multiple corporate customers have cropped up in the area in recent years, making metro Phoenix an emerging hub for the industry.

Companies cite the area’s reasonable costs for electricity, available space and lack of natural disasters as reasons for investing here.

In east Mesa, Japan’s NTT Ltd. is building a campus with seven data centers and a Facebook data center is going up in the area, too. In the West Valley, Vantage Data Centers is building a three-center campus in Goodyear.

But while the region ranked third nationally for data center construction in the first half of 2021, city leaders are looking to shift away from the industry, the Arizona Republic reported.

The City Council reviewed a staff proposal this month to restrict building new data centers, except on a handful of sites along Price Road already zoned for that use. Three companies operate data centers in the city, all clustered in that corridor.

Developers could still build new data centers in Chandler, but they'll face a lengthier and more rigorous approval process. “Over time we’ve realized it’s a drain on water and energy and as Price Corridor has evolved we’ve realized data centers aren’t our target,” Vice Mayor Mark Stewart said. “When you couple that together … it’s just not the perfect fit for Chandler.”

The computer servers housed inside data centers require constant power, generate a lot of heat and need constant cooling to maintain a specific temperature. When CyrusOne opened its first data center in the Continuum business park on Price Road it used water to cool its servers. The data center consumed all the water allocated to the business park so subsequent data centers built there had to use electricity to cool the servers, Mayo said. The increase in energy use has required the Salt River Project to build more substations and utility lines, he said.

Along with being unsustainable, the mechanical equipment used for cooling generates a constant high-pitched hum that bothers nearby residents.

Mayo said the cooling systems sound similar to the whir of an air conditioning unit, except there are dozens operating nonstop. “It’s like your house AC system times a million noise-wise,” he said.

Data centers have backup generators that are fired up every few months to ensure they’re working properly, another source of noise, he said.

Some residents near the centers along Price Road report using earplugs, noise-canceling headphones, fans and pillows to drown out the sound.

Jennifer Goehring, who lives in Clemente Ranch, said she initially thought it was a house party when she heard the noise late at night several years ago.

Some of her neighbors and even residents in other neighborhoods heard it as well. They finally narrowed it down to the nearby CyrusOne data center, which has industrial air conditioning units that hum.

Goehring said residents reported the sound to the city and called the company but nothing was done.

Mayo said the city’s noise ordinance addresses nuisances and noise migrating off property. But the language is vague, he said, which means it doesn't necessarily prohibit the type of noise emanating from the data centers.

Goehring and other residents came together in 2017 to document their concerns and called on the City Council for help. City officials worked with CyrusOne to install noise-reducing equipment, but Goehring said it didn’t make a difference. She said the chillers continue to churn every day, creating a groaning hum that's hard to tune out. They’re loudest at night when there’s less ambient noise, making it hard to sleep. “It just kind of bombards you and once you notice it, it drives you nuts,” she said.

The noise from the generators is even louder, as if a helicopter is landing on her house, she said.

The proposed code amendment would prohibit developers from building data centers anywhere in the city under existing city zoning if it’s the primary use of the space.

Many businesses have smaller data centers inside their facilities and those would still be allowed because they’re not considered a primary use of the land, Mayo said.

There are five sites in the city zoned for data centers along Price Road between Germann Road and Mockingbird Drive.

CyrusOne has multiple centers on a stretch of land adjacent to Chuparosa Park. Digital Realty operates a 519,000-square-foot data center at Price and Germann roads and H5 Data Centers has a facility just north of there.

Two of the five sites are vacant, though a data center is planned on one parcel now going through the city building process.

If the amendment is approved, the city won't be able to prohibit new data centers from being built on the two vacant sites or existing centers from expanding their facilities. The city is limited by state land-use regulations that prevent municipalities from making zoning changes that would negatively impact private property owners.

Developers would need to seek a zoning change, go through a public hearing process and get council approval to build a data center outside of that area.

The code amendment would require a noise study before and after construction expanding existing data centers or building new centers on available parcels. The new rules also would require sound mitigation for mechanical equipment.

Developers would have to notify residents living within a half-mile of the data center, hold neighborhood meetings and provide a neighborhood liaison.

Stewart said this could help mitigate some of the noise and encourage data centers to be good neighbors.

Karthic Thallikar, who lives in the Brittany Heights neighborhood, said the proposed changes come too late.

Thallikar first noticed the humming noise penetrating his bedroom and living room in 2014. He said it forced him to use earplugs to sleep and caused extreme anxiety and health problems.

Thallikar said the proposed prohibition won’t help his neighborhood, but could help people in other parts of the city.

Goehring, the Clemente Ranch resident, said she's fed up with the constant humming near her home.

“Nothing is going to alleviate the noise that is there right now but if we can stop it from getting bigger and more out of control that would be great,” she said.