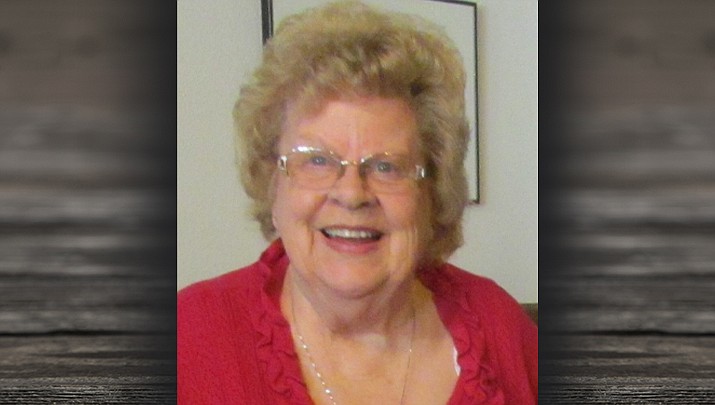 Jennifer Danielle Stephens was born Oct. 30, 1938 to Jennielee Cofer McDonald and Daniel Alexander McDonald. Dan died in a mining accident May 30, 1938. After that, Jennielee, Danielle and her older brother Dan lived with her grandparents Clyde and Irene Cofer. In 1940, Jennielee married Judd Bishop and the family moved to the Windmill Ranch 35 miles from Kingman. Danielle loved the ranch with the dogs, horses, cattle, fresh air and freedom. They lived in a new home with all the conveniences of the day. When she was four, the house burned to the ground and they began again in the two-room bunkhouse. She loved life in the bunkhouse especially because she was close to the corrals and horses. Besides her dog and horse Cupid, she grew up with a pet badger, chipmunk and a pet pig named Rooter. She spent many happy summers on the ranch with her brother Dan and their cousins. They fought outlaws, had horse races and the girls played in the river making mud pies or giving each other beauty treatments.

Danielle went to Palo Christi school in Kingman for first and second grades. She then attended Whitney school north of Wikieup until seventh grade. It was a one-room school house with 13 students, no running water and a wood stove in the middle of the room. Junior high and high school were spent in Kingman until graduating with an "A1" class in 1957. Her classmates were a close knit group and remained loyal, lifelong friends. She moved to California and spent a wonderful year with her aunt and uncle, Sally and Chuck Edwards, and their daughters while attending Sawyers School of Business until graduating in 1959.

She married Frank Stephens in 1960 and began ranching life at Little Cane Springs on the Sandy north of Wikieup. Running a cattle ranch was hard work for the whole family, and she spent many years feeding hungry cowboys and keeping the home fires burning. Round-up was the busiest time of year and would end with taking the cattle to market. Danielle said that the biggest blessing was to be able to work and play side-by-side with her children. As Wade and Marilee entered grade school hers was the home away from home for many of her kids’ friends. She said the most fun they ever had as a family was watching all the school plays and participating in field trips. Those were fun years and there truly never was a dull moment.

Life was very busy but Danielle found time to pursue many of her own interests. She was a Mary Kay consultant for four years, took painting and interior design classes, and also the Dale Carnegie course. She authored a cookbook, Pioneer Family Recipes, and had her own business, The Herbal Workshop, for six years in downtown Kingman. She also worked as the official baker, mom and cheerleader to the crew at the family's appliance and electronics business for many years. Later, she did a lot of research into the family genealogy and was always so proud of her family heritage. Danielle was a talented artist and painted many beautiful oil paintings. She was curious and not afraid to try new things and always had a project going. Between activities she was able to do some traveling and enjoyed many adventures with her best friend, Julia.

Danielle never gave up, never stopped trying, and lived a full and rich life until, sadly, she lost her own battle with cancer. She was a loving wife, precious mother and dear friend. She will be missed, but her legacy of love and encouragement will continue on forever.

Danielle is survived by her husband of 61 years, Frank Stephens; her son, Wade Stephens; her son-in-law, Richard Hamilton; and her granddaughter, Nina Scheerer. She is preceded in death by her beloved daughter, Marilee Hamilton.

The Stephens Family would request that any donations in memory of Danielle be made to the Kingman Cancer Care Unit at Kingman Cancer Care Unit, P.O. Box 3014, Kingman, AZ 86402 or by contacting them at kingmancancercareunit.com/donation. Additionally, the family will be planning a special Celebration of Danielle's Life for spring 2022. Details about this memorial service will be forthcoming.