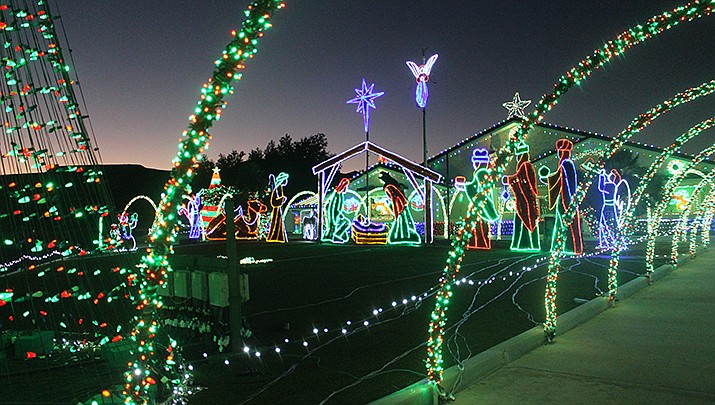 The annual holiday light display at the Preston household in Kingman will continue nightly through Jan. 1. (Photo by MacKenzie Dexter/Kingman Miner)

David Preston’s home features over 300,000 lights and has become a Kingman holiday classic for locals and travelers. Since the 1980s, Preston has built a collection that illuminates the neighborhood.

While he has no intention of ending the tradition, he plans to scale back after this year. Preston, 76, said that roof lights have become a challenge. Instead, he enjoys spending time on the technical and computerized aspects of the display.

Walking around hundreds of wires snaking around his yard, Preston and his helper spend about 40 days and up to 12 hours a day preparing the display prior to the reveal of the lights on Thanksgiving. The display has been featured on TV and has been a destination for marriage proposals.

Inspired by his neighbors' decorations and his wife’s excitement about having light hooks on their house, Preston said the community’s love for the display is what keeps him going, particularly one member.

“She ultimately turned me into the monster that I am,” Preston said about his wife’s influence.

Preston also shared the story of a terminally ill woman who was looking forward to seeing the display one last time. Preston said the woman told him she had several months to live after her diagnosis and had always enjoyed visiting his house every holiday season.

“When I see how much people appreciate it ... it’s what keeps me going,” Preston said.

The impact the display makes on individuals is what keeps Preston climbing up the roof, adding more wires and inviting the community to his home. He also enjoys syncing up the lights to music, and talking to attendees as they enjoy the free display.

The days are long and the project isn’t cheap, but Preston said adding the extra joy to the holiday season is worth it. On average, Preston said the display adds about $600 to his electricity bill.

“Kids like it, but the adults appreciate it a little more because they start to realize how much time is involved,” he explained.

Preston’s favorite piece of the display is a large LED tree at the corner of his driveway. Each pixel continues red, green and blue and can make millions of colors.

“I don’t make that many colors, but you could,” Preston said.

Preston encourages people to come over as many times as they like and walk the grounds, as long as they stay on the cement.

The light display will be available until Jan. 1 from 5:30-10 p.m. daily. To get to the display at 661 Shadow Mountain Drive, take Gordon Avenue west off Stockton Hill Road, turn right on Shadow Crest Road, left on Canyon Hills (at the first stop sign), and then right onto Shadow Mountain Drive.