COVID-19 cases on the rise among Phoenix homeless population 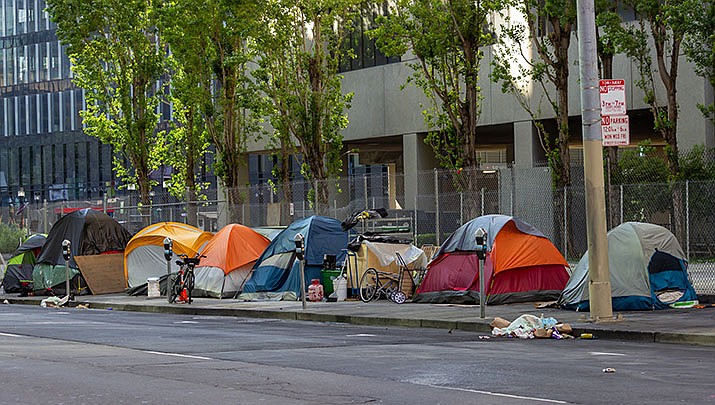 Phoenix’s homeless population is wrestling with its own surge in COVID-19 cases and more medical workers are urgently needed, advocates say. (Adobe image)

PHOENIX – Phoenix's homeless population is wrestling with its own surge in COVID-19 cases and more medical workers are urgently needed, advocates say.

A Phoenix hotel used to isolate and treat homeless people with the virus is nearly full these days, the Arizona Republic reports.

“Not only are we dealing with this higher demand on behalf of our patients, we’re also dealing with a shortage of employees,” Marty Hames, Circle the City spokeswoman, told the newspaper.

The organization and Maricopa County have been operating the Phoenix Inn since May 2020 as a refuge for homeless who tested positive or are waiting for test results. According to Hames, the hotel was seldom full and they were actually contemplating closing up shop earlier this summer.

Several times in recent weeks, however, the Phoenix Inn reached its full capacity of 90 patients. Hames said the number of cases rose sharply as the highly transmissible delta variant started to spread in metro Phoenix.

Since then, there have been outbreaks at Circle the City's “medical respite centers” and other shelters. The cases are mostly people who are unvaccinated but there have been some breakthrough ones, Hames added.

Like a lot of health care providers, Circle the City has seen lots of departures of health care workers exhausted by the pandemic. The organization is hoping to recruit more people with incentives such as signing bonuses and a 401(k) match.

Circle the City is also trying to do more vaccine outreach. They have been hosting vaccine events for the homeless as well as offering them to anyone who shows up at their clinic.

“We’ve made progress,” Hames said. “But it’s just like in the general population: There are people who do not want to get the vaccine.”

Michael Harris, who lost his housing while in the hospital with COVID-19, recently got vaccinated so as not to spread it to a friend he will be temporarily staying with.

Meanwhile, the Arizona Department of Health Services reported 2,744 new confirmed cases of COVID-19 Thursday. The state also calculated another 25 deaths. The daily case count was likely higher because of a system glitch earlier in the week kept all cases from being reported, officials said.

The percentage of those eligible who have received at least one vaccine dose inched up to 58.2% – or more than 4.1 million people. Nearly 3.7 million have been fully vaccinated.