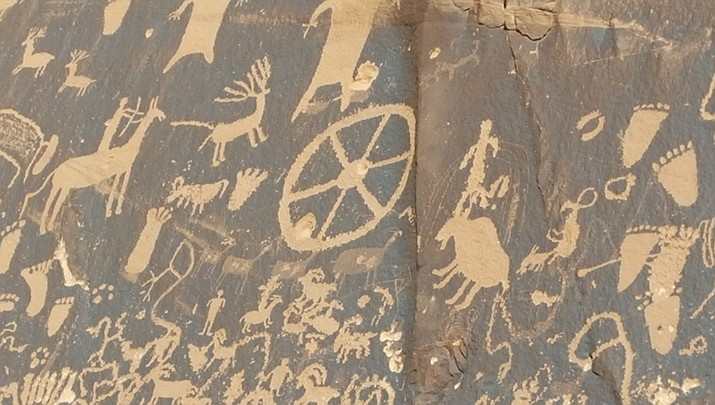 The petroglyph covered and aptly named Newspaper Rock in San Juan County, Utah is pictured. The petroglyphs were made by pecking and scraping off the iron and manganese oxides from the weathered rock. (Photo courtesy of Luis Vega)

Weathered rocks have that familiar natural look, just like old wood. They look like part of the natural surroundings. In contrast, a fresh rock surface looks out of place, stands out and doesn’t look natural. That’s why road cuts look so out of place. Just take a look at the roadcuts on I-40 through Kingman. They are white and have no character. The natural hills with weathered Peach Springs Tuff look tan to buff-brown. They belong and the weathering gives them that natural look.

When rocks are exposed to the elements, they’re attacked in three ways; physical, chemical and biological. Heat and cold expand and contract the surface causing cracks to form between the minerals. These cracks allow water to seep in. When water freezes in the cracks, it pushes out, widening the cracks. Exposed to water, the minerals are attacked by oxidation and weak acids. Biochemical processes also attack, converting minerals into clay. Even lichen, that colorful yellow-green composite organism (algae and or cyanobacteria) attacks the surface of rocks.

As the minerals begin to break down, they release substances like iron and manganese oxide. The oxides coat the weathered rocks and give them a darker appearance.

Chemical weathering is most visible where limestone outcrops, such as the Hualapai Limestone formation in Hualapai Wash downstream from the recreation boundary off of Gregg’s Hideout Road. Driving down the wash on Recreation Road- 138, there are excellent exposures of limestone formed in freshwater. The surface of the limestone is very jagged. This is caused by chemical weathering. As rainwater falls through the air, it mixes with carbon dioxide forming carbonic acid. This acid is weak but just strong enough to chemically weather the carbonate component of the limestone. The non-carbonate part remains as small rough-jagged projections. Don’t fall on limestone because these jagged projections will cut you bad.

Native Americans also noticed that fresh rock stands out from the weathered rock, especially those weathered rocks that are coated with oxides. They used this feature by pecking away at the oxide coating on surfaces to make beautiful petroglyphs. I’m always amazed at the ability of these early artisans to make such beautiful drawings simply by using the differences between weathered and unweathered rock.

Mohave County is fortunate to have many petroglyph panels and individual sites. The Cottonwood Cliff area is where I’ve found the most petroglyphs. I call it the Native American scratchpad because of the large number of petroglyphs. They’re not easy to reach and require some strenuous hiking. I came across them hiking up the west flank of the Cottonwood Cliffs while prospecting for volcanogenic massive sulfide deposits west of the Walkover and Alabama mines. The petroglyphs are located on a ridgeline overlooking Hackberry Wash to the west and the flat lands of the Colorado Plateau to the east. This must have been a lookout station and the watchmen must’ve had plenty of time to doodle on the rocks.

The north end of Long Mountain is another area with several petroglyphs that stand out on the dark, iron-stained basalt boulders.

The most impressive petroglyph site I’ve seen is called Newspaper Rock in southeastern Utah. The light-colored sandstone is coated with iron oxides to a dark brown-black. The large number of petroglyphs on one rock face is amazing. I have a picture of this rock face as the desktop on my computer.