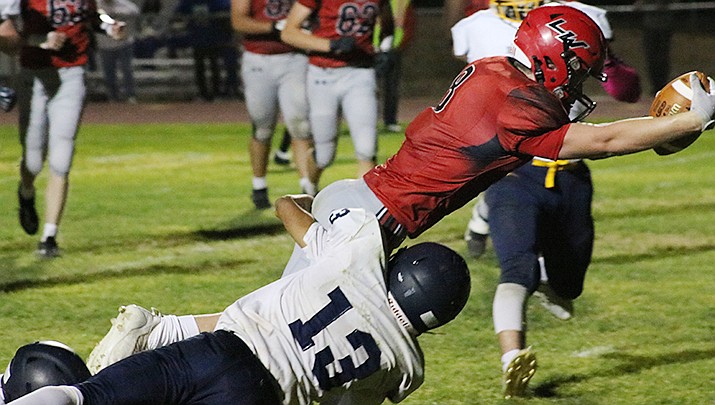 Troy Edwards of Lee Williams High School reaches for a touchdown against Kingman on Friday, Oct. 1. The Volunteers will attempt to improve to 4-2 on the season when they travel to Coconino High School on Saturday, Oct. 9. (Photo by Travis Rains/Kingman Miner)

KINGMAN – With a week to go before the first rankings are revealed, the Lee Williams High School football team will be attempting to put itself in the mix when it visits unbeaten Coconino for a rare 2 p.m. start on Saturday, Oct. 9.

The Vols, winners of three of their past four games, are 3-2 on the season. They’re coming off a 48-28 win over cross-town rival Kingman last week.

Coconino has two games under their belt this year. They’re coming off a 49-21 dismantling of Marcos de Niza High School last week.

Kingman will be the only local high school playing at home this week. They host Wickenburg with the kickoff slated for 7 p.m. on Friday, Oct. 8.

The Bulldogs are a run-oriented team led by senior running back and captain Nick Williams-Garcia, who is nearing the 1,000-yard milestone after just six games. Williams-Garcia has gained 940 yards on 131 carries and scored 10 touchdowns. He’s averaging 7.2 yards per run. He’s also caught six passes for 58 yards out of the backfield.

Senior quarterback Garrett Stryker runs the Bulldog offense, and has completed 51% (26-51) of his passes for 428 yards and five scores. He’s contributed another 351 yards rushing, including a 111-yard outing in a win over Chino Valley on Sept. 24.

The Class 3A Bulldogs, who are coming off a 20-point loss to cross-town rival 4A Lee Williams, are looking to climb above the .500 mark with a 3-3 record.

Wickenburg is 2-4 on the year, and has scored just six points in its past two outings, both losses. Last week they were shutout by River Valley 49-0.

Kingman Academy High School will visit the Griffins of Glendale Preparatory Academy on Friday for a 7 p.m. kickoff. The Tigers are 1-5 on the season, while Glendale Prep has won two straight games and is 2-4 for the year.