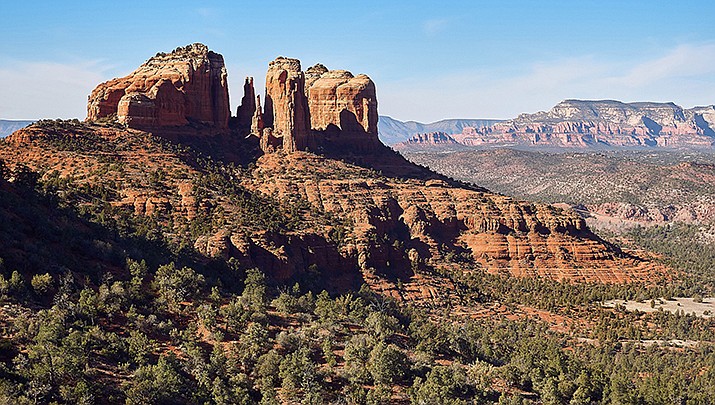 SEDONA – Rain held off, fog burned away and a few shafts of morning light pierced the cloud cover shrouding Cathedral Rock in the distance, giving the Crescent Moon Ranch near Sedona’s Red Rock Crossing even more of an inviting sheen than normal.

Good day to kick back, bring a picnic lunch and let the waters of Oak Creek lull you into leisurely laziness.

Sorry, but for a group of volunteers and the staff at HistoriCorps, there was work to be done.

HistoriCorps, a Colorado-based nonprofit whose teams of preservation and restoration workers travel the country to ply their trade making sure that historic buildings at parks and national forests don’t fall into disrepair, currently is encamped at Crescent Moon Ranch to restore four buildings – hay loft, barn, blacksmith shop, water wheelhouse – in various stages of ramshackleness.

It can be a painstaking process, says Alex Randall, the HistoriCorps project leader, and Ann Dowd, ranger for the Coconino National Forest. The U.S. Forest Service and Department of Interior has strict and particular standards and guidelines for preservation of sites – the material to be used, the amount of rebuilding allowed, the adherence to historical accuracy, the balance between repairing and replacing.

So at Crescent Moon Ranch – built by white settlers in the late 1800s and once a thriving orchard and agricultural hub but now a tourist stop in the Red Rock Ranger District – the HistoriCorps crew must make sure that, for instance, the juniper posts in the barn are secure and free of rot or else be replaced with near-identical junipers, that the new cedar shingles on the water wheelhouse match what’s there and that any boards supporting the siding be made of rough-sawn lumber to give the proper time-weathered appearance.

Though the preservation work at Crescent Moon is quite an undertaking – the barn, especially, needs some work – Randall said he has been impressed with how well the ranch buildings have held up over the decades.

“With a lot of these historic structures, especially in the frontier days, they didn’t expect it to last 130 years, but here it is,” Randall told the Arizona Daily Sun. “That, in itself, is a great reason to preserve it. There’s so much history there and those people had no clue that this would last.

“On this project, this is more preservation, I’d say, because we’re just fixing up the roof structures and strengthening. We’re just weather-proofing the buildings to keep the structures intact. I mean, they’ve lasted this long, so our goal is to keep it from rotting. By putting new roof and siding on, you’re not doing anything major. But that is one of the most important things, keeping the weather out.”

Ideally, by the time HistoriCorps leaves a work site, visitors won’t be able to discern that they’ve been there – unless they look closely. Its goal is to keep sites looking as they did back in the day. Even if the U.S. Forest Service didn’t dictate that, the nonprofit cites preservation as its core mission since its founding in 2009 and partnership with the federal government.

Many of the projects have enabled the Forest Service to provide the public with cabin rentals in a historic setting where none have previously been available. Though the current work at Crescent Moon Ranch does not include the ranch house – it’s in fine shape and being rented regularly in summer and fall – the propping up of surrounding structures such as the blacksmith shop and barn adds to the ambiance.

In addition to adding to the Forest Service’s list of cabin-rental properties, the preservation work is vital in and of itself, according to Jeremy Haines, an archaeologist and Kaibab National Forest staff officer who has been a prime mover in bringing HistoriCorps to northern Arizona forest sites.

“HistoriCorps has been a critical ally in our fight to save these significant places,” Haines said. “As their model is dependent on volunteer participation, the public has an opportunity to work on the forest, learn about historic preservation, make lasting contributions and forge friendships. So the partnership is unique in that it’s more than just fixing up historic buildings. There is also great value in the relationships that develop between HistoriCorps, the Forest Service and our volunteers.”

Volunteers at Crescent Moon Ranch, supervised and joined in toil by Randall and his HistoriCorps colleagues, recently were busy measuring and sawing and measuring some more on support beams and the placement of corrugated metal roof tiles.

The work is not for dilettantes, but neither do you have to be a master craftsperson, Randall said.

Above all, any volunteer must have a commitment to historical accuracy in the work, even down to removing and replacing crumbling mortar from the original stone walls of the blacksmith shop. The crew has had some challenges in the early going at Crescent Moon Ranch, most notably restoring the skeletal frame of the hay loft, which rises about 30 feet in the shadow of the ranch house.

“Doing the roof on the hay (loft) was tough, because there is no decking boards up there,” Randall said. “There weren’t too many great places to stand, and the two-by-fours in there were really rotting, so I had to kind of put in fresh wood to make it solid. But we got it done.”

Then he nodded to the barn – or what remains of the barn, with missing boards and gaps evident – and added: “That, structurally, will be the toughest.”

Much of the wood on the exterior is rotted, warped and splintered. The corrugated roof is rusted and peeled back in places. The main door on the south side? It won’t open. But inside, the juniper posts are intact and have seemed to weathered the years well. But much sprucing up of the barn, its stalls and outcroppings needs to be done.

The rough-sawn lumber, acquired from a mill in Flagstaff, figures to be used with impunity in the barn, but Randall said his crew probably won’t need to use the historically accurate juniper poles that the forest service acquired for the rafters. Still, they are nice to have, because sometimes in preservation work, foundations turn out not be as solid as thought.

“You want to do what the original people would’ve done to make it not look too new. The good thing is, the weathering comes pretty quickly, so in a season or two or three and it’ll blend with the original construction nicely.”

Still, HistoriCorps has, on-hand, the juniper and the aspen posts for the blacksmith shop. It might be easier just to slap together some two-by-fours to buttress the two buildings, but any visitor would quickly notice the incongruity of shiny lumber next to rough-hewn bark-gnarled wood. So workers have to say no to expedience.

They also sometimes have to make accommodations for nature, since they are working on Forest Service land. HistoriCorps has had to limit the use of power tools, especially down by the water wheelhouse after a forest service biologists told them that a yellow-billed cuckoo had nested near there and would be none too happy with the racket.

But, he noted, it’s not all work on the site. In addition to the campfires at night and cookouts with staff and the volunteers, Randall said it’s a short jaunt up to Cathedral Rock.

“There’s a trail that starts right there,” he said, pointing north, “and leads right up there. Isn’t that great?”