Library operations in Kingman area kick back into gear 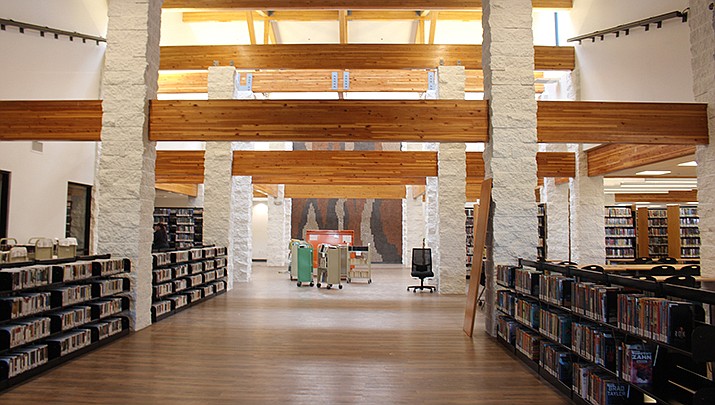 Operations are returning to normal at the Kingman branch of the Mohave County Library after disruptions caused by the coronavirus pandemic. (Miner file photo)

KINGMAN – The Mohave County Library – Kingman branch is once again offering after-school programs for kids, and has announced that its mobile book program has already returned to some senior living facilities and will be returning to area schools.

Kathy Pennell, library director, was asked to update the Mohave County Board of Supervisors on library operations on Monday, Oct. 4.

“We are offering a variety of programs for youth,” Pennell said. “Kingman family story time is held on Wednesday mornings. If attendance remains as high as it is right now, we’ll be adding an additional session.”

She also referenced weekly after-school programs, adding that the library is always looking to “keep abreast of any special circumstances.”

“For instance, this week and last week the students in Kingman have been on fall break, so we have added some special programs knowing they would probably be available and attend some of these,” Pennell said, noting those included an art program.

She also addressed why some areas of the library remain closed. For example, there are set rooms for story times in Kingman that are not being utilized due to a lack of space. She added that those rooms are never open for the public to use whenever or however they please.

Pennell said that one bank of restrooms at the Kingman facility had been closed, but was recently reopened.

“We’re not even getting half of the traffic we’ve gotten in the past, and we felt that we had sufficient restrooms available for the public for the number of people coming in,” she said. “We have since reopened them since it was a concern, though we still aren’t getting enough people to justify that.”

Pennell also said that only a little over half of the computers are operational at the libraries. That, again, is due to decreased traffic. She added that staff is monitoring computer usage, and computers are being brought back online if people are having to wait.

Mobile book programs are also kicking back into gear, with the effort set to return to area schools in the coming months. The program runs to Wikieup, Yucca, White Hills, Scenic and Littlefield/Beaver Dam. She said schools had asked for the program to return once students returned from break.

The library had similar conversations with senior living facilities. The program has already returned to Cerbat Guest Home and Harrison Haven, both in Kingman. Other Kingman facilities are set to see service return in the coming months, per their request.

Supervisor Travis Lingenfelter of District 1 said since taxpayer dollars go toward the library, he would like to see all areas opened. He also said he has noticed a book mobile parked at the public works facility.

“Our large book mobile that’s the size of a bus, we have not used that one yet,” Pennell explained. “We are using a smaller sprinter, or a van, to go out. When we go out to the locations we take the carts inside that way; they don’t come in and walk in the book mobile. At this moment, we have no staff in our book mobile area. We have one staff member, but he is out for an extended medical issue. We really don’t have anybody who is certified to be driving that bus right now.”

Lingenfelter asked if staff could be trained to drive the bus, with Pennell responding that the first step is to hire someone.

“We currently have 13 full-time vacancies and four temp vacancies, plus the one person who is out on medical leave,” she said. “We’re struggling with that. I don’t know what the plan will be for the big bus.”