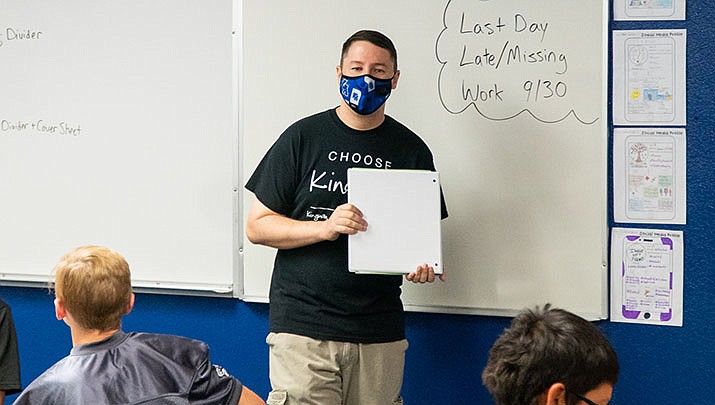 KINGMAN – Ronald Marcks is a Mohave Community College graduate and was the first Kathy Hodel Most Outstanding Student Award recipient. He is now educating future leaders at Kingman Academy of Learning Middle School.

The inaugural $10,000 Hodel award was presented to Marcks in 2018 because of his academic success and volunteer work helping students. It is given each year to a graduating MCC student, and they can spend the money as they wish. Marcks used it to obtain a Master of Education in Educational Technology degree from Northern Arizona University.

“The money was put toward going to NAU and furthering my master’s degree with them so I could be better prepared for everything when I became a teacher,” he said. “If I didn’t win the award, I would’ve had to take out student loans to pay for tuition.”

While earning his associate degree in liberal arts from MCC he was also working toward his bachelor’s degree in elementary education from NAU. Marcks graduated from MCC in 2018.

He said MCC provided him the foundation to attend both schools at the same time. He was able to come to the MCC campus and attend the NAU classes remotely.

He is now an eighth-grade social studies teacher. He said he decided to go into teaching because it was similar to what he did in the U.S. Air Force as a staff sergeant.

"Becoming a teacher was always something in mind that I wanted to do, from mentoring younger troopers as a sergeant, to back in high school when I looked up to one of my favorite teachers who really inspired me," Marcks said.

His 10 years of military experience also helped prepare him for his career as an educator. He takes what he learned and brings it into the classroom, which helps him connect with students.