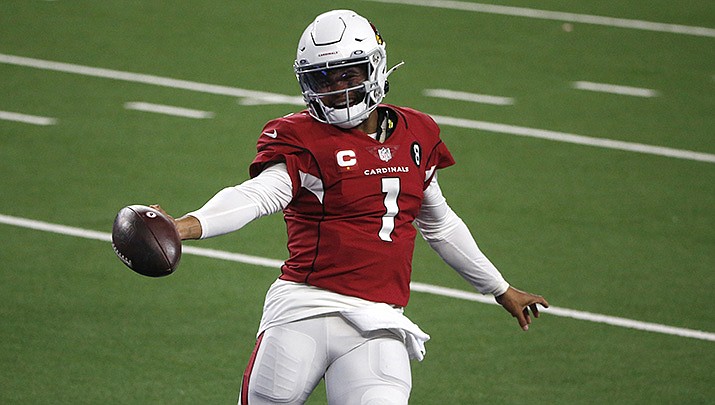 Kyler Murray and the Arizona Cardinals, the NFL’s only undefeated team at 4-0, will host the San Francisco 49ers on Sunday, Oct. 10. (AP file photo)

TEMPE – The Arizona Cardinals are at the top of the NFL right now as the league's final remaining undefeated team.

Playing the role of the favorite doesn't bother Kyler Murray at all.

“This is not a new feeling for me. It feels right, it feels normal,” the third-year quarterback said. "To be back in a position where we go into each and every game confident that we will come out victorious is a great feeling, for sure.”

The Cardinals will try to improve to 5-0 for the first time since 1974 when they host the San Francisco 49ers (2-2) on Sunday. The 49ers are trying to snap a two-game losing streak.

Arizona comes into the game with the league's highest-scoring offense at 35 points per game. That's in large part due to Murray, who has emerged as one of the early season MVP favorites. The 24-year-old is completing 76.1% of his passes, which leads the NFL, and he's thrown for nine touchdowns while running for three more.

“They’re just clicking on all cylinders," 49ers coach Kyle Shanahan said of the Cardinals. "Which they did at the beginning of last year, too. But they’ve got some playmakers, they’ve got a perfect scheme for all their playmakers and they’re making it tough for teams.”

Niners rookie quarterback Trey Lance could make his first start if Jimmy Garoppolo can’t play because of a calf injury. Garoppolo left last week’s game at halftime because of the injury and his status for this week was up in the air.

Lance struggled with his accuracy during his long run of play in last Sunday’s 28-21 loss to Seattle, but still finished 9 for 18 for 157 yards, two touchdowns, a 2-point conversion run and 41 yards rushing.

“I thought when he got thrown into battle here, just running the offense and not really his specific plays, I thought he got more comfortable as the game went,” coach Kyle Shanahan said. “Especially going home and watching the tape after the game, I thought there was a lot of encouraging stuff.”

NO SACKS, NO PROBLEM

Cardinals defensive end J.J. Watt – a three-time NFL Defensive Player of the Year with the Houston Texans – has zero sacks this season for his new team.

Cardinals defensive coordinator Vance Joseph said teams are paying a lot of attention to Watt and linebacker Chandler Jones, working to block the elite pass rushers and keep them away from the quarterback. That's made everyone else's job on the defense easier.

Watt's been close on several sacks, but said he's not bothered by the lack of eye-popping statistics. He added he's not surprised teams are using max protect blocking schemes to slow him down.

One feature of the Cardinals' offense so far this season is its balance. A.J. Green (248), Christian Kirk (244), DeAndre Hopkins (225) and Rondale Moore (211) all have at least 200 yards receiving this season. Tight end Maxx Williams is right behind them with 179 yards while running back Chase Edmonds has 140.

Could the Cardinals have four 1,000-yard receivers on one roster? It's unlikely but also not totally out of the question.

Murray said he's just getting the ball to whomever is open.

“I would love to do that, but as of right now, keep working, continue to try to not be one-dimensional," Murray said.

Deebo Samuel has turned from a gadget player who excelled getting handoffs, fly sweeps and screens to a player who could be a bona fide No. 1 receiver for the 49ers.

Samuel has 28 catches for a league-high 290 yards receiving in the first four weeks for San Francisco as he has shown the ability to go downfield for catches after his average reception last year came behind the line of scrimmage.

He took advantage of a blown coverage to catch a 76-yard TD pass last week, his second TD of the season of more than 75 yards.

That has helped Samuel post the second-most yards receiving through four weeks in franchise history to Jerry Rice’s 522 in 1995.

“Deebo is a very special, unique player,” 49ers linebacker Fred Warner said. “Especially in our type of offense, you can use him a lot of different ways. Maybe there are people that are used similarly, but they’re not Deebo. He’s built like a running back, he runs like a running back, but he’s a receiver. He attacks the ball like a receiver, he can make plays downfield like a receiver.”

The Niners return to Arizona for the first time since spending the final month of the season there in 2020 after COVID-19 protocols kicked them out of Santa Clara County.

The 49ers stayed at a hotel and practiced right next to the Cardinals stadium and played their final home games there, as well as a Week 16 road game against Arizona.

“I think it hardened us all a little bit,” Shanahan said. “You go through a month of that and the situation, I don’t think that time was fun for many people in the world. That was a tough deal for us. We’d like to say we persevered through it.”