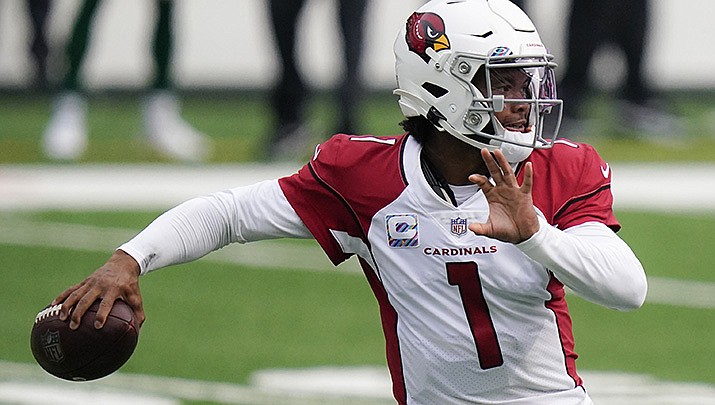 The Cardinals are still undefeated five games into the season for the first time since 1974 after beating the San Francisco 49ers 17-10 on Sunday. Kyler Murray threw for 239 yards, DeAndre Hopkins had a stellar touchdown catch in the fourth quarter, and the defense turned in a top-caliber performance punctuated by four crucial stops on fourth down.

It was a different way to win for the Cardinals, who came into the game leading the NFL by scoring 35 points per game. San Francisco actually outgained Arizona 338 yards to 304 and the Cardinals went more than 45 minutes between their two touchdowns.

There's not much doubt the Cardinals would have lost games like that in recent seasons. Now they're finding ways to win them. They'll probably need a few more ugly wins to come out on top of a difficult NFC West that's a combined 13-7. Four of those losses came in games played against each other.

“They aren’t always going to be sweet and pretty and flashy or have all the touchdowns or anything like that,” Murray said. "You’re going to have to capitalize when you can, that’s a great team over there. It was definitely not to our standards, an ugly one offensively, but we got it done and that’s all that matters.”

The 1974 Cardinals, based in St. Louis, went 10-4, then lost in the first round of the playoffs at Minnesota.

The Kliff Kingsbury experiment. The Cardinals took a risk three years ago by hiring the 39-year-old coach, who had a reputation for developing great quarterbacks but also lost a lot of games at Texas Tech. He now appears comfortable in the NFL and after the 5-0 start his career record has improved to 18-18-1.

“I've always been of the belief that it's about the players,” Kingsbury said. “If you have really good players, you'll be a really good coach.”

The Cardinals couldn't get much going on the ground Sunday. Murray ran for just 1 yard on seven carries. The team's leading rusher was actually receiver Rondale Moore, who had 38 yards on three carries. Give credit to the 49ers – they're very good on defense – but the Cardinals need to run the ball better to keep winning games.

DE J.J. Watt. He's one of the greatest defensive players of this generation and is starting to make his presence felt with the Cardinals. He had his first tackle for a loss with Arizona against the Niners and also came up with a huge fourth-down pass deflection in the fourth quarter. Watt may be 32 years old, but he's proven he's still a difference maker.

RB Chase Edmonds. He had one of his least productive games of the season, running for just 15 yards and catching three passes for 19 yards. He also had what could have been a costly fumble in the fourth quarter, but the Cardinals' defense was able to come up with another big stop.

The Cardinals might have taken their first major injury hit of the season when TE Maxx Williams hurt his right knee in the second quarter. Williams had emerged as a key part of the offense. Kingsbury said the team will know more about Williams' status over the next few days.

The Cardinals continue their difficult early-season schedule with a road game against the Cleveland Browns. It's an intriguing matchup between Murray and Browns QB Baker Mayfield, who are good friends and won the Heisman Trophy in consecutive seasons at Oklahoma.

“The Browns are loaded,” Kingsbury said. “That's as talented of a roster as you'll find in the NFL.”