Sinking temperatures in store for Kingman area this week 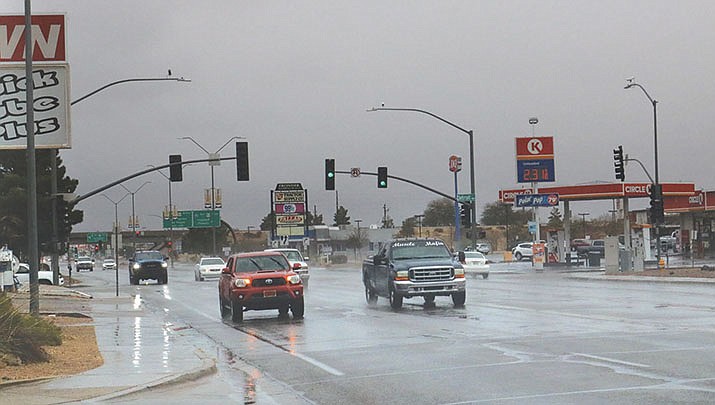 Colder-than-average temperatures will prevail this week. The Kingman area has received .05 inches of rain in recent days, but there’s no more precipitation in the immediate forecast. (Miner file photo)

KINGMAN – While heavy blankets and maybe even heat will be utilized by Kingman-area residents as overnight temperatures drop to the low 40s this week, daytime temperatures aren’t forecast to be as cool as they were on Tuesday, Oct. 12, at least through Monday, Oct. 18.

Tuesday only saw a high of 58 degrees, and paired with winds of 10-13 mph and gusts as high as 20 mph, the area saw below-normal temperatures, according to the National Weather Service. Those conditions came a day after the area saw gusts reach as high as 50 mph on Monday, Oct. 11.

The area also received a measureable amount of precipitation Monday evening and into the early morning hours of Tuesday. According to weather service measurements taken at Kingman Municipal Airport, .05 inches of precipitation fell in the past 72 hours. No additional precipitation was in the forecast for the remainder of the week as of noon Tuesday.

While temperatures won’t be quite as cool as Tuesday, the remainder of the week will still see below-normal temperatures for this time of year. Wednesday, Oct. 13 has a forecast high near 64 degrees and a low later that night around 42. Thursday, Oct. 14 will see a high near 67, wind gusts as high as 21 mph and a low later that night of around 41.

Friday, Oct. 15 will see the temperature reach 70 degrees for the first time in days prior to falling back to around 43 Friday night. The temperature will jump to 77 degrees on Saturday, Oct. 16, which has a forecast low near 49.

According to NWS, temperatures are set to begin returning to normal by Sunday, Oct. 17, which has a forecast high near 78 degrees and a low of around 51.