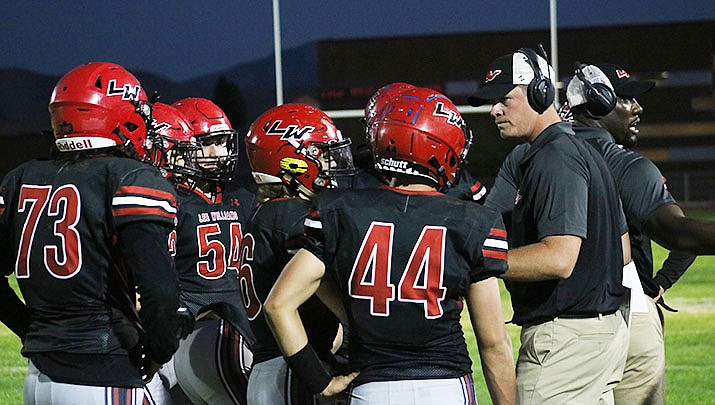 The Lee Williams High School football team and head coach Patrick O’Boyle will play at Bradshaw Mountain on Friday, Oct. 15. The Volunteers are 3-3 and ranked 19th in the state, and are gunning to make the 16-team Class 4A state playoff field. (Miner file photo)

KINGMAN – The first state rankings of the year are out as the high school football season grinds toward an end, and the prospects don’t look great for the teams from Kingman.

Lee Williams remains in the running. The Volunteers, who are 3-3 under head coach Patrick O’Boyle, are ranked 19th in the state in Class 4A. The top 16 teams make the playoffs.

On Friday, Oct. 15 Lee Williams will travel to face a Bradshaw Mountain team that is 3-2, has a two-game winning streak, and is ranked 22nd in the state. The Volunteers will be looking to avenge a 51-28 loss to the Bears last season. Then junior quarterback Devean Santos threw for 289 yards and three touchdowns, and added 81 yards rushing, in the loss.

Lee Williams has dropped two of their past three games, the only win coming against Class 3A Kingman High School on Friday, Oct. 1. Santos did not play in the Vols’ 29-20 loss to third-ranked Coconino last Saturday, Oct. 9.

Kingman will host Mohave High School, which dropped down to Class 3A from 4A this year, in its final home game of the season. The squads did not play each other last year.

The Bulldogs are 3-4 on the season, but have dropped three of their past four games. The Thunderbirds have lost three straight games after a 3-1 start, and fell 38-0 to River Valley last week.

Kingman is coming off a 28-0 home loss to 15th-ranked Wickenburg. The Bulldogs are ranked 27th of 39 teams in Class 3A, and are a longshot to make the 3A-playoff field.

Kingman will be looking to get its offense back on track, after managing only 100 yards and six first downs in the loss to the Wranglers.

Kingman Academy will be searching for its second win of the year win it hosts undefeated Parker (6-0), the top-ranked Class 2A team in the state, in its final home game of the season.

The Tigers are 1-6, and were shutout in four games this year, including a 28-0 loss at Glendale Prep last week.

Parker boasts an explosive offense that has averaged 42 points per game this season. Kingman Academy is ranked 34th among 44 teams in Class 2A.