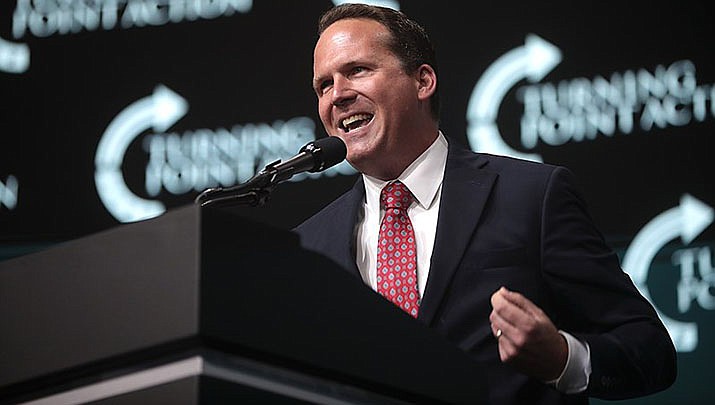 PHOENIX - Justin Olson, a Republican on the state's utility regulation board, announced Wednesday he's running for the U.S. Senate, becoming the fifth major candidate hoping to take on Democrat Mark Kelly in 2022.

Olson said he’s a reliable and proven conservative and spoke little of former President Donald Trump, whose endorsement carries weight in a GOP primary but could be problematic in a general election matchup. That's a stark contrast with his Republican rivals who are working aggressively to link themselves to Trump in tone and substance.

Following an announcement speech at the state Capitol, Olson wouldn’t say if he’ll ask Trump for his endorsement, saying only he “would be honored to have his support.” He didn’t back Trump's false claim that he lost the election because of fraud and acknowledged Democrat Joe Biden was the winner.

“That’s been the outcome, you know, but we absolutely should look into everything that happens in the election to ensure that we have secure elections,” Olson told reporters.

Olson's surprise late entry in the race gives his rivals a significant head start in fundraising, which will be crucial for a field of little-known candidates to introduce themselves to primary voters. He faces Attorney General Mark Brnovich; Jim Lamon, a wealthy energy company founder; Blake Masters, who has received millions in support from his longtime employer, billionaire investor Peter Thiel; and Michael McGuire, the retired head of the Arizona National Guard.

National Republicans view the Arizona race as one of their best opportunities to take back control of the U.S. Senate, controlled by Democrats. Kelly, who won a special election last year to finish Sen. John McCain's last term, faces a tougher contest in the 2022 midterm, when the party of the incumbent president often loses ground.

Gov. Doug Ducey appointed Olson to the Arizona Corporation Commission in 2017, and he was elected two years later. The commission regulates privately owned electric, gas and water utilities, among other functions. He previously represented Mesa in the state House, and was a congressional aide and tax advocate. He's a member of the Church of Jesus Christ of Latter-day Saints.

He stepped down this month as the chief financial officer of Turning Point USA, which organizes young conservative activists and has prominently supported Trump.

In his announcement speech, Olson decried proposed Democratic spending on social programs and promoted his credentials as a fiscal conservative.

“I will bring Arizona’s conservative values to our nation’s capital, and above all, I will never back down in the fight for freedom,” Olson said.

Democrats signaled they will look to tie Olson to Turning Point's far-right politics.

“Olson will fit right in with the other out-of-touch candidates in the race,” Arizona Democratic Party spokeswoman Sarah Guggenheimer said in a statement.