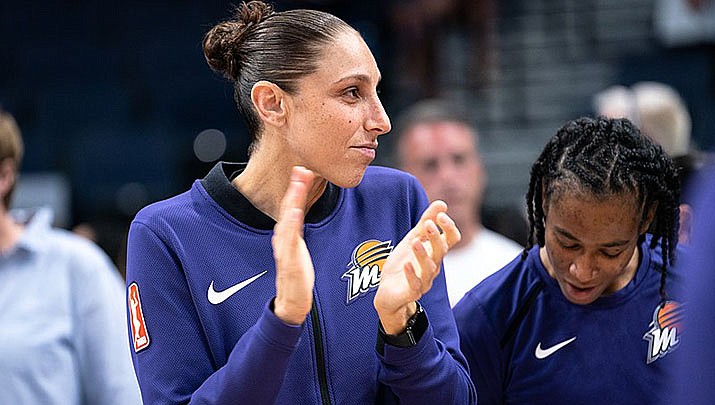 Diana Taurasi and the Phoenix Mercury evened their WNBA Finals series against the Chicago Sky at 1-1 with a 91-86 win on Wednesday, Oct. 13 in Phoenix. Game 3 is Friday in Chicago. (Photo by Lorie Shaull, cc-by-sa-4.0, https://bit.ly/3BPgTV2)

PHOENIX - Summoning the will that's made her great for so long, Diana Taurasi scored eight of her 20 points in overtime to help the Phoenix Mercury even the WNBA Finals at 1-all with a 91-86 win over the Chicago Sky on Wednesday night.

“That's the GOAT right there,” said Mercury center Brittney Griner, who dunked and had 29 points. “We know time is going down, it's crunch time, we have all the faith in the world she's going to make big shots for us.”

Griner carried the Mercury early and brought the Phoenix Suns players sitting courtside to their feet with her second career playoff dunk in the first quarter. She scored on a turnaround jumper to help give Phoenix a late four-point lead in regulation, but just missed blocking Courtney Vandersloot's tying layup with 4.4 seconds left.

Held to six points through three quarters, Taurasi opened overtime with a four-point play and added a 3-pointer that put Phoenix up 89-86 with 1:24 left. Taurasi then came up with a huge defensive play, getting a steal with 36 seconds left, and Skylar Diggins-Smith sealed it on a layup with 12.8 seconds left.

Game 3 is Friday in Chicago.