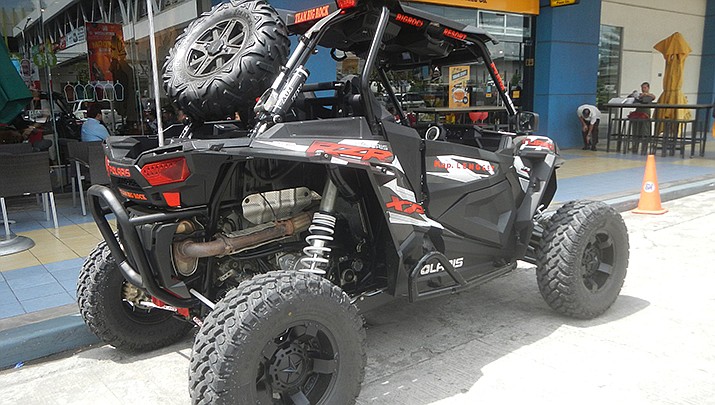 The UTV World Championships will be held in Lake Havasu City this weekend. (Photo by Judgefloro, cc-by-sa-1.0, https://bit.ly/3ABAQh8)

LAKE HAVASU CITY – The best UTV racers in the world will compete in Lake Havasu City this week for the Seventh Annual UTV World Championship.

The top racers will battle for the UTV World title at Standard Wash, which is south of SARA Park. Over 200 racers will compete in a variety of classes including desert, unlimited, pro turbo and short-course classes. A very large group of youth racers are also expected to compete.

“It’s a really stacked field of competition,” Martelli said. “It’s going to be an exciting race.”

Races begin on Friday, Oct. 15 at 7 a.m. with the short course race followed by multiple classes of youth racing. The Rally Class race, along with Sportsman and RS1 races, will take place later in the afternoon.

Qualifying races started at noon at the Standard Wash on Thursday, Oct. 14. Racers will battle for starting positions that day on a short one-mile course. They will compete on a four-mile loop.

Races on Saturday, Oct. 16 include the Desert N/A, Unlimited and the Desert Pro Turbo classes. The Desert N/A and Unlimited classes will compete on the full ultra-technical, four-lap 114.4 mile race course. Saturday’s races start at 7 a.m.

It’s the second consecutive year the event will take place in Havasu after moving from Laughlin, Nevada. Festivities began Wednesday with the Rigid Industries Poker Run.

“The poker run is a pretty cool event because you can bring your regular stock UTV down and come and participate in that in about a 60-mile loop,” Martelli said. “We have a ton of prizes that we’ve been given by our sponsors. There’s some good stuff for people to win and it’ll be a beautiful day to enjoy the desert with your friends and family and get a taste of what the racers will go through come race day.”

A notable change this year is moving the AZ West UTV Festival to downtown Lake Havasu City on McCulloch Boulevard. The festival include about 100 vendors on McCulloch. Last year, the festival was held near the track at Standard Wash. After a successful event last year, the city asked organizers to hold something downtown.

All events during the UTV World Championships will be free and open to the public.

“We had a great event last year in Havasu,” Martelli said. “The city has been fantastic to work with and I think we’re going to have more spectators and I think it’s going to be a bigger event than it was last year.”