Forensic geology: The case of the misplaced well 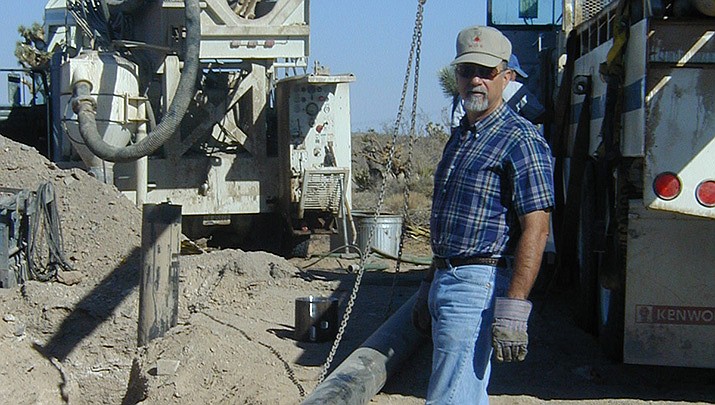 Drilling and testing water wells in the Hualapai Basin. (Photo by Luis Vega/For the Miner)

I’m a fan of TV law enforcement shows. I’m intrigued by the strategies used by the police and lawyers to catch the bad guys. I’m especially interested in the episodes that contain crime scene investigations using forensic geology to advance the inquiry. I studied economic geology, focusing on mineral exploration and mining but have also had to rely on my basic geology in three legal actions; two civil matters and one criminal case.

Mohave County has issues that rely on scientific information and the interpretation of scientific studies, such as the amount of water in its basins. The two civil matters I was involved in were because of water. Mark Twain is credited with saying, “whisky is for drinking, water is for fighting;” I had to render my expert opinion on the presence or absence of water. Water had a large impact on the value of the land in question and therefore the amount of land the bankrupt landowner had to deed to the lien holder on the land. My job was to study the area, determine the probability of there being water and thus allowing the appraiser to assign a value to the land in question.

Luckily, I’ve completed several water studies and had a good idea of where to start. My first inquiry was the Arizona Department of Water Resources (ADWR) website (https://new.azwater.gov/), where a number of water studies are presented. For those contemplating drilling a water well, it’s the best place to get started to see if there’s water underneath your property. The website includes an interactive map that shows every well drilled in the state of Arizona along with depth-to-water and sometimes even water pump test results.

I diligently completed my study and presented the results at the pre-trial deposition where I was questioned by both attorneys. I felt confident in my findings and thought I defended the report well. After deposing all other witnesses involved, I was informed that the case would be going to court and I should be ready. Not wanting to be blindsided, I decided to look at the case through the defendant’s position, going over all the basic facts.

During my initial study, I’d found a water well that didn’t fit the pattern so I discarded the information as incorrect. The ADWR records stated that the well put out 700-plus gallons per minute from an area that I’d projected didn’t contain water. I decided to investigate further and find out why the well didn’t fit the pattern of wells around it that were all dry. Could there be an underground fault that channeled water to that particular well but not to the wells around it? Not likely.

I downloaded copies of the original papers filed by the owner of the well to the ADWR database. To my surprise, I happened to know the owner. I called him and asked if he could show me the well. We got together and drove to a plant site near the Kingman airport. There, in the yard next to the main building, was the well. Both the well owner and I looked at the filing documents and realized that he’d made a mistake in describing the well’s location. The documents placed the well six miles east of where it was actually located. The well did have water, it was within the boundary of the saturated basin-fill and not in the location of the area where I’d predicted there was no water.

What a relief. I had an explanation as to why the well didn’t fit the pattern or my model. I even took pictures of the well with its ADWR number and the owner standing next to it. I anticipated that the defense attorney would ask me during cross examination why there was a well that didn’t fit my model and that I was wrong in saying that there was no water under his client’s land. I had the perfect reply with pictures and everything.

The big day arrived. I drove to Las Vegas in my best Levi’s, white shirt and polished boots and entered the courtroom. The attorneys were gathered in front of the judge having a heated discussion. When the discussion was over, the plaintiff’s attorney walked over to me and thanked me for coming but said they didn’t need my help anymore. The two parties had agreed to a settlement and the case was over.

I was crushed! What about my Perry Mason moment? I wanted to have my day to shine in court. This was completely unfair. I wanted to show that scientific studies can and do answer questions that impact people’s lives. The problem had been human error, not science. Nature presents us with information. It’s up to humans to interpret the information for the good of mankind. The information can be corrupted, twisted and misrepresented so all good investigators must go back to the original data to find the truth. Nature isn’t wrong; we humans just have to interpret nature correctly.