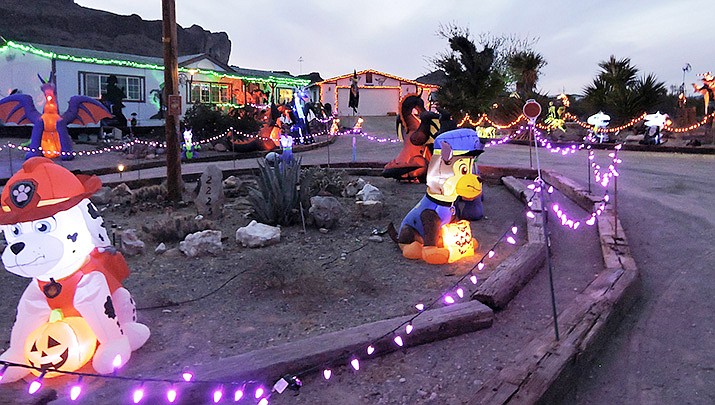 The Meriwether Halloween display in Golden Valley, which includes approximately 45 blowups and “other creepy things,” is open to the public from sundown until 10:15 p.m. through Nov. 1. (Courtesy photo)

Attractions listed above “are just some of the details that ‘bring to life’ the Halloween spirit of about 45 blowups and other creepy things Chris Marie and Butch Meriwether have put together for everyone’s enjoyment who decide to drive by their home at 2225 S. Dome Road in Golden Valley,” the Meriwethers wrote in a news release.

The display will be up each night from sundown until 10:15 p.m. through Nov. 1. Chris Marie said her home/display is a safe place to bring children on Halloween night to get some candy.

“Don't forget that if you do decide to visit their Halloween display, it isn't mandatory, but they would appreciate it if you would bring a bag of dog or cat food for the no-kill domestic animal shelter and sanctuary For the Luv of Paws, and/or a new unwrapped toy to be turned over to the Marine Corps League Detachment #887 and the Marines who will be passing out toys this year to local needy children at their Christmas toy giveaway,” the release continued.

To visit the display turn south on Egar Road at mile marker 17 from State Route 68 and drive south for four-and-a-half miles before turning right on Tapeats Drive. Head west on Tapeats for about a half-mile (five blocks) to reach the display at the corner of Tapeats and Dome.