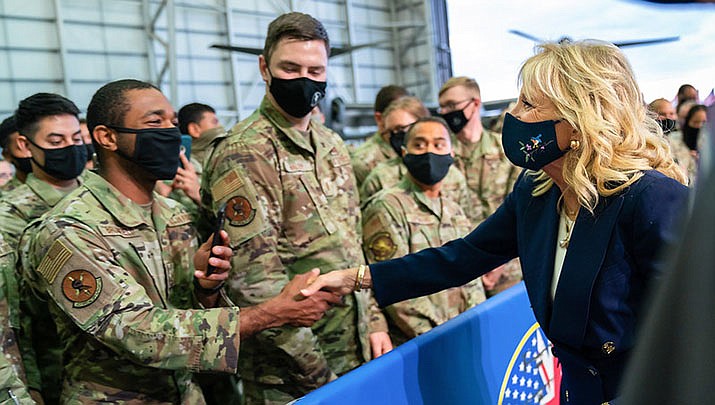 First Lady Jill Biden credits the wife of a South Carolina pastor for brining prayer back into her life. (White House photo/Public domain)

WEST COLUMBIA, S.C. – For years, Jill Biden couldn’t bring herself to pray, her faith shattered by the 2015 death of her son Beau from brain cancer at age 46. She felt “betrayed, broken.”

Then a face in the crowd at one of her husband’s stops in 2019 as he campaigned for the Democratic presidential nomination would, in her words, change her life.

Robin Jackson, wife of the pastor at Brookland Baptist Church in South Carolina, offered to be Jill Biden’s “prayer partner” when the Bidens worshipped at the church.

Thus began a relationship that the first lady said had helped “shape my life.”

Jill Biden talked about her South Carolina friend as recently as February of this year, but always without naming her. On Sunday, she returned to Brookland Baptist to help celebrate Pastor Charles B. Jackson Sr.’s 50th year of service and laid out in emotional detail how his wife had helped her reclaim her faith.

“I’m sorry if you’ve heard it before but I’d like to share it again,” she said before retelling the story.

The first lady doesn’t usually speak publicly about her faith but said Sunday that “it’s always been an important part of who I am.” She recalled being a teenager who “fell in love with the peace of the quiet wooden pew,” the “joy of the choir” and the “deep wisdom of the Gospels.”

She said prayer helps her “connect to the people that I love and to the world around me.”

“But in 2015, my faith was shaken,” the first lady said, her voice breaking as she described watching “my brave, strong, funny, bright young son fight brain cancer.”

“Still, I never gave up hope,” she said. “Despite what the doctor said, I believed that my son would make it. In the final days, I made one last, desperate prayer and it went unanswered.”

She didn’t understand how Beau could die. She grew angry, then distant from God.

“I felt betrayed by my faith, broken,” the first lady said, her voice quivering. Her own pastor emailed occasionally to check in and invite her back to service “but I just couldn’t go. I couldn’t even pray. I wondered if I would ever feel joy again.”

Then she accompanied her husband, Joe, to Brookland Baptist on May 5, 2019.

“Something felt different that morning,” the first lady said. She described how Robin Jackson came to sit beside her and ask to be her “prayer partner.”

“But I do know that when she spoke it was as if God was saying to me, ‘OK, Jill. You had enough time. It’s time to come home,’” she said. “And in that moment, I felt for the first time that there was a path for my recovering my faith.”

The first lady said Robin Jackson’s “kindness, mercy and grace pushed past the callouses on my heart and, like the mustard seed, my faith was able to grow again.” She said it reminded her that what was at stake was not an election or a partisan battle, but a country in need of healing.

“This church changed my life,” she said to applause.

The pastor’s son, the Rev. Charles B. Jackson Jr., said that his mother began texting prayerful reminders to Jill Biden a few days after they met. The first lady returned the texts. “This would continue on all the way till today,” Jackson Jr. said.

Jill Biden said earlier this year the relationship with Robin Jackson had made a difference in her life.

“It really helped me find my faith again,” she said on Kelly Clarkson’s daytime talk show.

She occasionally accompanies the president, a devout Catholic, to Mass and was with him Saturday when he worshipped at Holy Trinity Catholic Church in Washington.

Her role in celebrating the pastor’s 50th anniversary was a surprise for Robin Jackson in keeping with the first lady’s reputation for doing thoughtful things for people she cares about. Jackson Jr. said his mother did not know the first lady would participate in the celebration.

“It took everything in us to keep it from her,” Jackson Jr. said.