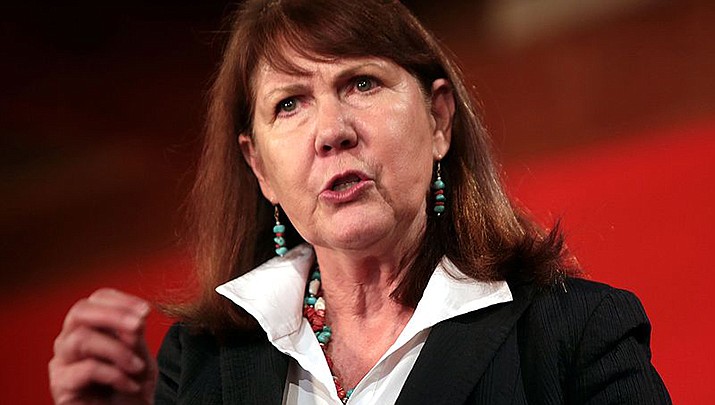 U.S. Rep. Ann Kirkpatrick (D-Arizona) is retiring and Democratic State Sen. Kirsten Engel, who is seeking to replace Kirkpatrick, has resigned her state Senate seat to focus on her congressional campaign. Kirkpatrick is pictured. (Photo by Gage Skidmore, cc-by-sa-2.0, https://bit.ly/3BRrTAI)

TUCSON – Democratic state Sen. Kirsten Engel of Tucson resigned from the Legislature on Wednesday to focus on her campaign for the U.S. House.

Arizona’s 2nd Congressional District race will be pivotal to the Democratic Party’s efforts to retain the U.S. House majority, “and this is not an endeavor to be taken lightly,” Engel said.

“I know how much work it will take to win this district, and I’m ready to take on that challenge whole-heartedly,” Engel said in a statement.

Incumbent Democrat Ann Kirkpatrick is retiring. The district, which includes parts of Tucson and southeastern Arizona, has been highly competitive in the past, though it’s unknown how the boundaries will change through the ongoing redistricting process.

Engel, an environmental law professor at University of Arizona, is in her first term in the state Senate following two terms in the House. She faces Democratic state Rep. Daniel Hernandez, who is best known as the intern credited with saving former U.S. Rep. Gabby Giffords when she was shot in the head.

State Rep. Randy Friese, another Tucson-area lawmaker, dropped out of the Democratic primary last week saying he needed to focus on his job as a doctor during the pandemic.

The Legislature is not scheduled to be in session until January. The Democratic precinct committeemen in Legislative District 10 will come up with a list of nominees from which the Pima County Board of Supervisors will pick a new senator. Engel’s replacement must be a Democrat.

Engel’s resignation makes for two Democratic vacancies in the 30-member Senate. The Maricopa County Board of Supervisors is nearing a decision on a replacement for Sen. Tony Navarrete, who quit after he was charged with sex crimes. He denies the allegations.

KYKOTSMOVI – Hopis are voting Thursday to narrow down the list of candidates for tribal chairman.

Tim Nuvangyaoma is seeking a second, consecutive term in the post. He faces David Norton Talayumptewa, a member of the Tribal Council and former U.S. Bureau of Indian Education official, whom he beat in the 2017 general election.

Polls on the reservation in northeastern Arizona will be open from 7 a.m. to 7 p.m. Thousands of Hopis are eligible to vote in the primary election.

The Hopi chairman and vice chairman run separately. Much of their authority comes from the Tribal Council, which functions like a city government. The chairman presides over meetings but doesn’t vote except to break a tie.