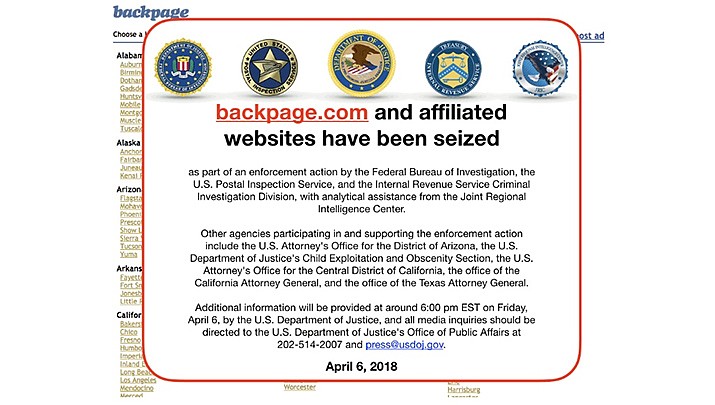 PHOENIX – Lawyers defending the founders of the classified site Backpage.com against allegations they knowingly ran ads for prostitution told jurors Wednesday that the adult service ads published by their clients were controversial but ultimately protected by the First Amendment.

Attorneys for Michael Lacey and James Larkin said in opening statements at their trial that the site ran legally allowable ads for escort services, but didn’t publish ads for sex. They say the site beefed up its staff and methods for spotting illegal ads, helped authorities in investigating sexual trafficking cases and earned compliments from law enforcement for their assistance.

“Backpage was doing everything they could to help the police,” said Paul Cambria, one of the attorneys representing Lacey.

Last week, a prosecutor told jurors that the majority of the site’s revenue came from prostitution ads but the founders and operators of Backpage tried to conceal it. The prosecutor said the site hired content moderators whose job was not to remove prostitution ads but to edit them so they weren’t so blatant. The prosecutor also said the website developed a partnership with a website where customers wrote reviews of prostitutes, which drove significant traffic to Backpage.

On Wednesday, U.S. District Judge Susan Brnovich denied a request for a mistrial made by defense lawyers, who argued a prosecutor’s repeated references to sex trafficking during opening statements were inflammatory.

The site’s marketing director has already pleaded guilty to conspiring to facilitate prostitution and acknowledged he participated in a scheme to give free ads to prostitutes to win over their business. Additionally, the CEO of the company when the government shut the site down, Carl Ferrer, pleaded guilty to a separate federal conspiracy case in Arizona and to state money laundering charges in California.

Lacey and Larkin founded the Phoenix New Times, held ownership interests in other weeklies such as The Village Voice and ultimately sold their newspapers in 2013. But they held onto Backpage, which authorities say generated $500 million in prostitution-related revenue from its inception in 2004 until April 2018 when it was shut down by the government.

The site’s operators are accused of giving free ads to prostitutes and cultivating arrangements with others who worked in the sex trade to get them to post ads with the company.

Bienert also said the operators of Backpage had reason to think they were operating legally, saying judges who presided in now-dismissed lawsuits over Backpage ads found that its adult services ads were protected by the First Amendment.

Some people might not like the material published on Backpage but the ads were still legal, Bienert said. “Controversial doesn’t equal illegal,” Bienert said. The trial is expected to last two to three months.