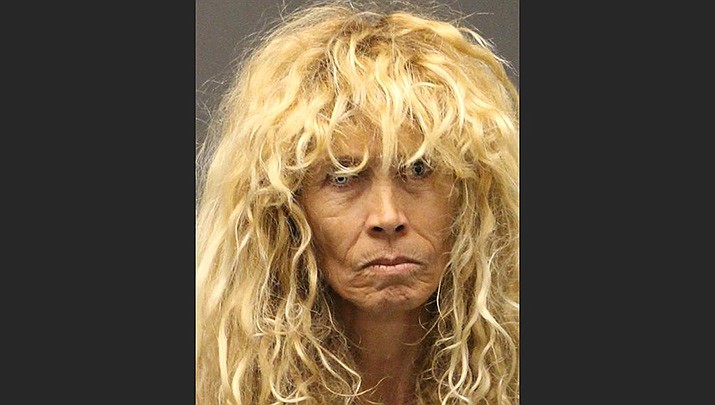 KINGMAN – Brenda Kay Thomas, 51, of Golden Valley, is alleged to have grabbed a Mohave County Sheriff’s Office deputy’s weapon while handcuffed prior to shooting him in the hand on Tuesday, Sept. 7 at the Maverick Country Store, 5031 Highway 68.

The Bullhead City Police Department, which is handling the investigation, wrote in a release that the sheriff’s office responded to the store in Golden Valley for a report of an erratic female walking inside the store with a gun in her hand.

Responding deputies contacted the woman, identified as Thomas, who was reportedly uncooperative and combative with police.

Law enforcement was able to take Thomas into custody on suspicion of disorderly conduct with a weapon and resisting arrest.

While being escorted outside in handcuffs, Thomas “somehow” grabbed the detective’s duty weapon out of its holster, Bullhead police wrote.

When the detective felt her grab the gun and tried to stop her, Thomas is alleged to have discharged the weapon, shooting the detective in his hand.

A deputy at the scene then tased Thomas, who was no longer armed but continued to be combative.

The detective was taken to a local hospital where he was treated for non-life threatening injuries to his hand. Thomas was not injured, and is facing an additional charge of attempted second-degree homicide.