Arizona looking to take next step against San Diego State 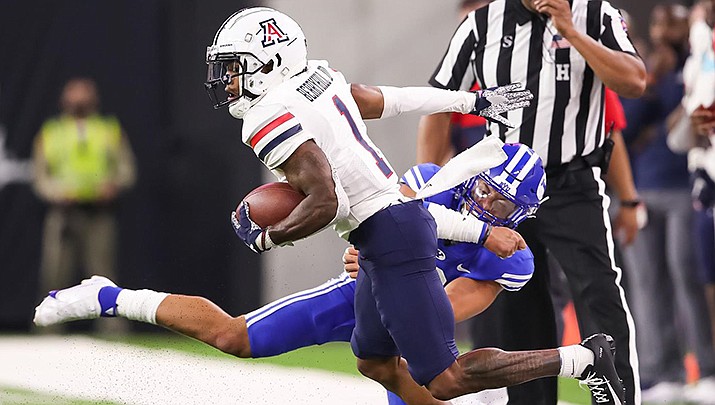 Arizona will be looking to break a 13-game losing streak when it hosts San Diego State in Tucson on Saturday, Sept. 11. (University of Arizona Athletic Department courtesy photo)

TUCSON, Ariz. - Arizona opened the season with a loss to a Group of Five program after falling into an 18-point hole, stretching its losing streak to 13 games.

The Wildcats viewed it as progress.

While a win would have been nice, Arizona kicked off the Jedd Fisch era with a decent showing last weekend, nearly rallying to beat BYU in Las Vegas. The Wildcats could have folded after the big early hole, but fought back and did enough good things to make them believe the losing streak will end soon — possibly Saturday at home against San Diego State.

Arizona is in dire need of a win.

The Wildcats haven't won since 2019, a losing stretch that included a 70-7 loss to rival Arizona State.

Fisch was hired to rebuild the program after Kevin Sumlin was fired and did all the right things during the offseason, generating a buzz in the desert.

The Wildcats stumbled early against BYU at the home of the NFL's Las Vegas Raiders, but clawed back behind quarterback Gunner Cruz. Though Arizona couldn't complete the comeback in the 24-16 loss, there were enough signs on both sides of the ball to at least see the corner they need to turn instead of being buried behind it.

The Wildcats are even favorites in their home opener, a first since 2019.

San Diego State also will be looking to get off to a better start.

The Aztecs stumbled out of the gate in their home opener and had eight penalties for 81 yards, but played a superb second half to beat New Mexico State 28-10. San Diego State had three interceptions in the second half and running back Greg Bell ran for 163 yards, including a 23-yard touchdown.

“It is a heck of a lot easier to make some corrections and (work on) fundamentals and any other things that we did poorly this game when you win a game, instead of losing the game,” Aztecs coach Brady Hoke said.

The junior set a school record with a 56.8-yard average on nine punts and pinned New Mexico State inside the 20 four times. His average is the second-highest in the FBS in the last 26 years with at least nine punts.

“When you look at the 100 yards he saved us, it was incredible what he did,” Hoke said. "The other thing is how well the punt team got down the field and how they covered. That was truly 11 guys doing their job playing together.”

San Diego State is 48-2 all-time when rushing for at least 200 yards after racking up 248 last week. ... Cruz set school records for completions (34) and pass attempts (45) for a quarterback in his starting debut since at least 1980. ... The Aztecs are 5-2 against Pac-12 opponents since 2016, the best nonconference record against the conference (minimum five games). ... Stanley Berryhill III set career highs with 12 receptions and 102 yards against BYU.