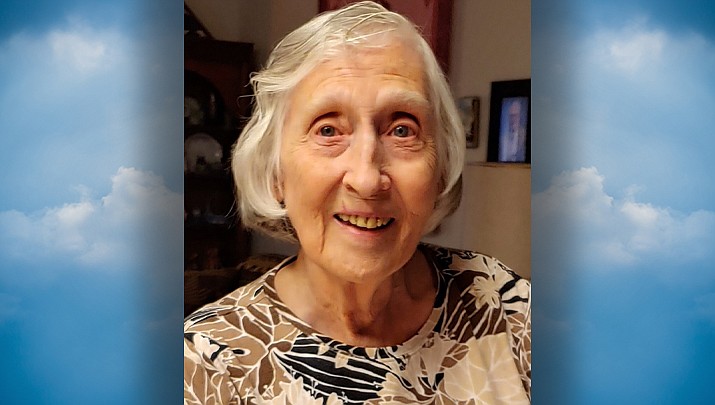 Fern Campbell passed away Monday, Sept. 6, 2021 from an accident in her home in Kingman, Arizona. She was 89 years young. Fern was born Oct. 6, 1931 to Chester and Bertha Garland (nee Fehr) in Hellertown, Pennsylvania. She enjoyed growing up in Pennsylvania with her older brother Dean, and her “Big Baby Brother” Brian.

Fern became a Registered Nurse as a young woman. She later married Robert (Bob) Campbell on Sept. 10, 1955. Together they had four children Richard, Scott, Robin and Lisa. They moved the family to San Diego, California in 1964, where they lived for 31 years. In 1995, Fern and Bob relocated to Kingman, Arizona to enjoy their retirement.

Fern enjoyed sewing, quilting and cross stitching and was a member of the Kingman Quilting Guild. She played guitar for a time and sang on various choirs. Fern liked to travel and saw Africa, parts of Europe and South America while traveling on her own. She loved the Lord and was a longtime member of Grace Lutheran Church. Fern was also very active, attending exercise classes twice weekly.

Fern is preceded to heaven by her husband, Bob, her second child, Scott Campbell and her grandson, Jeremy Campbell.

Fern requested to not have flowers for her services. In lieu of flowers, please make a donation to the charity of your choice in Fern’s name.

A service will be held on Saturday, Oct. 16 outside of Grace Lutheran Church located at 2101 Harrison St., Kingman at 1 p.m. Please dress appropriately for the weather.