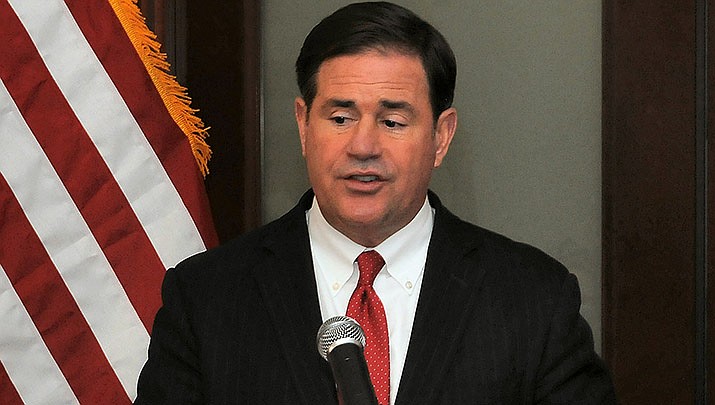 Arizona Gov. Doug Ducey has sought and received a federal disaster declaration which will help the state acquire emergency federal funds in the aftermath of monsoonal flooding in the state, primarily in Apache, Coconino and Navajo counties. (File photo by Howard Fischer/For the Miner)

PHOENIX – President Joe Biden on Monday approved Arizona’s request to declare a major disaster over monsoon flooding two months ago so the state can get emergency federal funds.

Among the areas hit hardest in the July 22-24 storms were the counties of Apache, Coconino and Navajo and Arizona Gov. Doug Ducey sought federal disaster declarations to get emergency funding.

Federal officials said funding is available to state, tribal and eligible local governments and certain private nonprofit organizations on a cost-sharing basis for emergency work and the repair or replacement of flood-damaged facilities.

Authorities said additional disaster designations may be made later if requested by Arizona officials and warranted by the results of further damage assessments.

Phoenix firefighters say the boy was riding with family Saturday near 71st Avenue and Roeser Road when the the ATV crashed and flipped into the Salt River.

He ended up being submerged in almost 8 feet of water.

First responders were able to get him out from the river bottom.

He was rushed to a hospital in extremely critical condition.

His current status was not immediately known Monday morning.

BUCKEYE – Two hospitalized toddlers remained in critical condition the day after they were found in unresponsive conditions at a residential pool in a Phoenix suburb, police said Sunday.

The Buckeye Police Department says that three children in all were at the pool on Saturday. Hospital officials were ready Sunday to release a 1-year-old child whose health was listed in fair condition, police said in a news release.

It wasn’t clear how long the children were submerged in the pool, which officials said wasn’t fenced.

Police say a man was inside the home when the children were in the pool.

An investigation is underway.

SCOTTSDALE – Police in the Phoenix suburb of Scottsdale are investigating the death of a Rhode Island woman whose body was found on a hiking trail.

Detectives said it appears 57-year-old Donna Miller died from a heat-related illness and environmental exposure, but it will be up to the Maricopa County Medical Examiner’s Office to determine the cause of death.

Police said the body was located Sunday night in the Brown’s Ranch hiking trail system north of the trailhead.

Officers responded to the area to assist the Scottsdale Fire Department after the woman’s husband called 911 when he couldn’t find her at their meeting spot after a planned separation on the trail.

The couple had started their hike shortly after noon Sunday and Miller’s body was found by county Mountain Rescue Team members about 9 p.m. after an extensive search of the area.

PHOENIX – Three people were injured, two seriously, after jumping out a second-floor window to escape smoke and flames from a fire in an apartment, the Phoenix Fire Department said.

The people jumped before firefighters arrived and put out the fire early Tuesday morning fire, Fire Capt. Scott Douglas said in a statement..

Two families were displaced by the fire, Douglas said.

Details on the victims’ injuries weren’t released and Douglas said the cause of the fire wasn’t immediately determined.