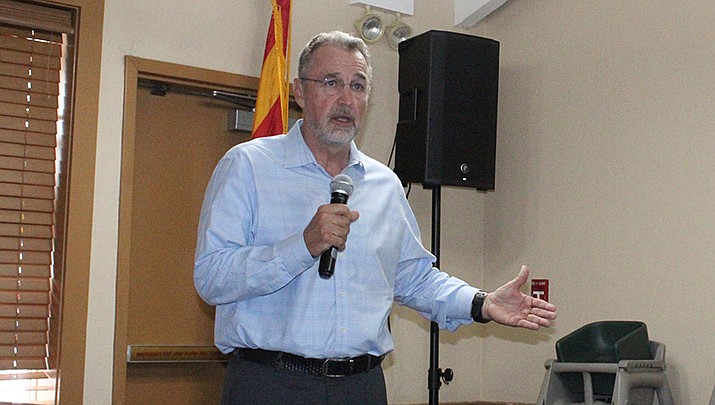 KINGMAN – Arizona GOP gubernatorial candidate Matt Salmon will be the featured speaker at the Monday, Oct. 4 meeting of the Kingman Republican Women.

Salmon is a familiar face in Arizona political circles. He was elected to the Arizona Senate in 1990, and four years later was elected to represent Arizona’s 1st Congressional District in the U.S. House of Representatives.

“In both houses he earned a reputation for standing on principle and challenging the status quo ...” the club wrote in a news release.

During his time in Congress, Salmon was named a “Defender of Liberty” and earned the “Taxpayer Hero” award from Citizens Against Government Waste. Among his legislative accomplishments was sponsoring and passing “Aimee’s Law,” a measure that gave no second chances for rapists, molesters and murderers.

Salmon honored his term limit-pledge and returned to the private sector in 2001. He stated his decision to return to public service was due to the growth of the size of government, the national debt and shrinking individual freedoms.

Kingman Republican Women meet the first Monday of each month at 11:30 a.m. for lunch and the meeting begins at noon. Meetings are open to the public and membership is not required. They are held at the College Park Church Community Center, 1990 Jagerson Ave. There is a $3 fee to cover the cost of the meeting room. A light lunch will be sold, and brown baggers are welcome.