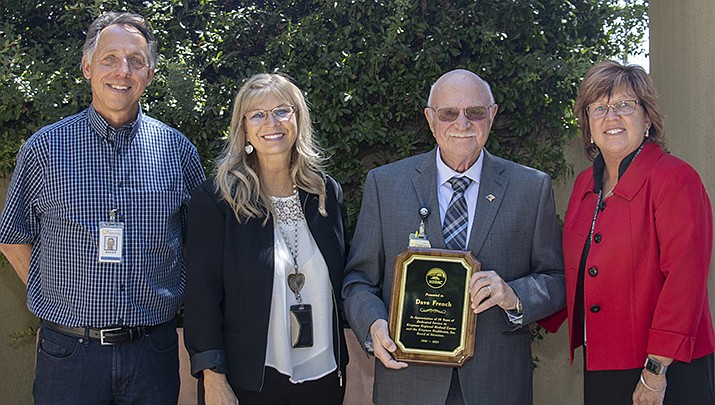 Kingman Healthcare Inc. board officers Jim Baker, Coral Loyd and Krystal Burge present David French, second from right, with a plaque to honor his decades of service on the board. (Courtesy photo)

KINGMAN – David French, a decades-long member of the Kingman Healthcare, Inc. Board of Directors, was recently recognized for his years of service following the announcement of his retirement.

Kingman Regional Medical Center wrote in a news release that French was originally elected to the board in 1985, and reelected in 1990, 1995 and 2000.

He served as treasurer from 1985-2009, at which time he was elected chairman. French also served on multiple committees during his tenure.

“I believe health care is one of the most important facets of any community,” French said in the release, “and though it is demanding, my work with KHI has been some of the most rewarding of my career.”

French was recently presented with a plaque to honor his time on the board.

KHI’s primary function is to oversee the operations of KRMC.

The board is comprised of 11 elected members along with the hospital’s CEO and medical chief of staff. Elected members hold three-year, staggered terms so no more than four directors are elected or reelected each year. Elected board members receive no compensation and are “community minded individuals,” the hospital wrote.