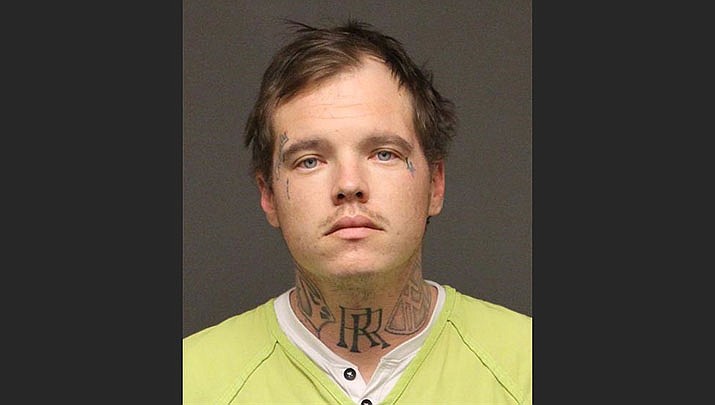 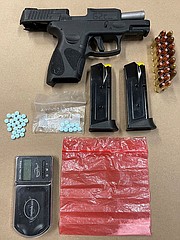 This gun, ammo and drugs were confiscated during a traffic stop on Saturday, Sept. 11. (MCSO photo)

KINGMAN – Brandon Lee Smith, 28, of Phoenix, was arrested by the Mohave County Sheriff’s Office on Saturday, Sept. 11 after a traffic stop in Lake Havasu City reportedly resulted in deputies locating fentanyl pills, methamphetamine and a handgun.

MCSO wrote in a news release that at 2 a.m. deputies stopped a black sedan for failure to signal a turn. Deputies made contact with the female driver, a male back-seat passenger and Smith, who was sitting in the passenger’s seat.

Deputies reportedly noted nervous behavior from all occupants during the stop. They asked the driver to stand by their patrol vehicle while a records check was conducted. When asked if there were weapons in the vehicle, the driver stated there were none, according to the sheriff’s office.

Statements made by all passengers of the vehicle “raised deputies’ suspicions of a gun being inside the vehicle,” MCSO wrote.

Deputies removed Smith from the vehicle and conducted a pat search, reportedly locating 22 suspected fentanyl pills. MCSO wrote Smith told deputies that there was a gun in the car.

A vehicle search reportedly revealed a pouch containing fentanyl pills and 2 grams of methamphetamine; a handgun, a scale and other drug paraphernalia, according to MCSO.

The driver was cited for a traffic violation and misconduct involving weapons before being released. The backseat passenger was also released. As none of the occupants claimed ownership of the pouch containing fentanyl and methamphetamine, all three were cited for illegal drug possession. According to the sheriff’s office, a total of 33 grams, or pills, of fentanyl was recovered from the vehicle.