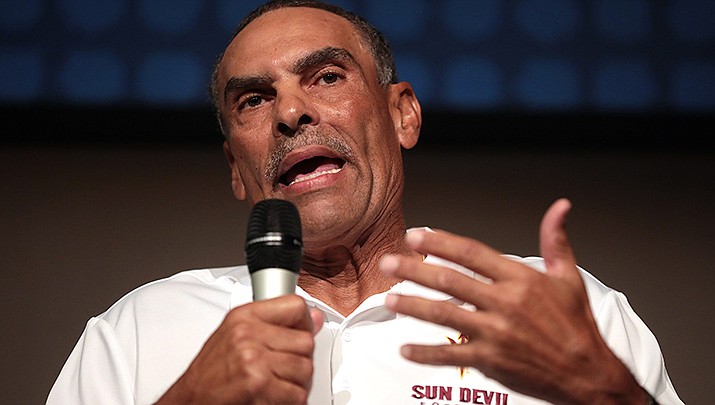 Coach Herm Edwards and his Arizona State Sun Devils, ranked No. 19 in the nation, travel to Brigham Young University to play the No. 23 Cougars on Saturday, Sept. 18. (Photo by Gage Skidmore, cc-by-sa-2.0, https://bit.ly/3ApcBSY)

“Back then, you can’t play offense for BYU if you can’t catch the ball,” said Sitake, whose program used to belong to the Western Athletic Conference with the Sun Devils.

BYU showcased a high-flying offense under Hall of Fame coach LaVell Edwards. He left a big impression not only on Sitake but also on Sun Devils coach Herm Edwards, who said he was recruited by BYU before attending California, Monterey Peninsula College and San Diego State. “I took a visit there and started a friendship with Coach," Herm Edwards said.

A tough task awaits ASU on Saturday: Playing in the stadium bearing LaVell Edwards' name. The Cougars have won 11 straight on that field.

Herm Edwards expects one thing: Noise. Plenty of it, too. “They have a great fan base,” he said. “You couldn’t be going to a better venue if you think about college football ... I think our guys are excited about the opportunity to play as well.”

Edwards stressed the importance of starting fast at a hostile place such as BYU.

“Don’t get off to a bad start,” he said. “Because if you get off to a bad start then you’re fighting two elements – the 11 guys on the field and the crowd. It doesn’t mean you have to score but you have to move the ball. If you go three and out, it’s like, ‘Uh oh, are you kidding me?’ Because then they’re excited and all of a sudden their offense has the ball and the energy of the stadium goes up.”

The Sun Devils have forced 38 turnovers over their last 13 games dating to 2019. It’s the most in the country over that 13-game span, according to ASU research. “It’s just a known fact in any kind of football that kicking game and the defense travels,” Edwards said.