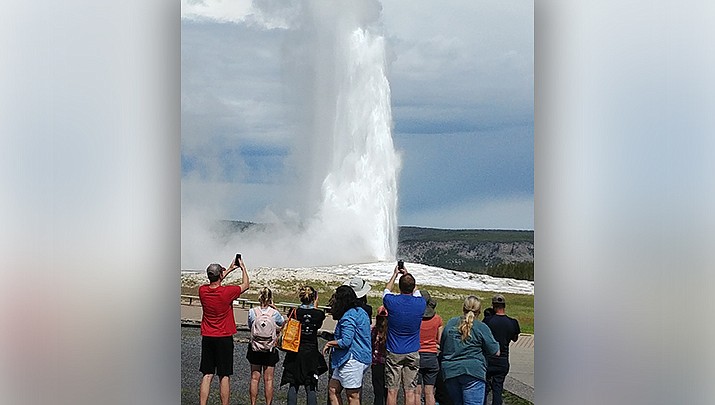 Visitors to Yellowstone National Park enjoy Old Faithful, one of the many geological phenomena caused by the Yellowstone hotspot. (Photo by Luis Vega/For the Miner)

I always like the anticipation and the hunt, not so much returning home at the end of field season. Except for this year. The record-setting heat and the forest fire smoke made prospecting downright unhealthy. This year, the best part was returning home to an air-conditioned office to begin research for next year’s field season. It’s the anticipation of the next strike that keeps a prospector feeling young.

Where to start looking for an undiscovered mineral deposit? I think it’s safe to say that every inch of the lower 48 has been prospected and every mineral occurrence that outcrops has been tested. So where do I go from here?

Luckily, geologic information is constantly evolving and new theories and concepts are being developed. These new theories can indicate where a mineral occurrence could be hiding. Its possibility must be accepted on faith and conviction in the theory, with the ultimate hurdle being the finding of investors willing to risk their money on a theory. Sometimes a geologist has to be a good salesman.

A prime example is the theory that the Yellowstone hotspot supplied the heat and gold for the “Carlin-type” gold deposits found in northern Nevada. Nevada produces over 8 million ounces of gold per year, mostly from Carlin-type deposits. Those looking for new deposits of this type would love to know what controls where these deposits were formed. Enter the new theories on the Yellowstone hotspot.

Everyone should visit Yellowstone with its geysers, bubbling hot springs and fumaroles. For a geologist, the bison, wolves and grizzlies are an added bonus but it’s the geologic phenomena that’s the main attraction. The source of the heat is a deep-seated molten rock originating in the mantle called a hotspot. The molten material rises through the earth’s crust until it reaches the surface and super-heats water causing a caldera explosion. The Hawaiian Islands sit on top of a hotspot. The hotspot doesn’t move but as the oceanic plate moves, the hotspot forms volcanic islands in a line that marks the movement of the oceanic plate.

But how can the Yellowstone hotspot be responsible for gold deposits in Nevada if it’s located way up in Wyoming? Enter the new theories. The Yellowstone hotspot hasn’t always been in Wyoming. It’s moved, or rather it stayed in one place in the mantle and the continental plate moved over the hotspot. Sixteen million years ago, what we now call Idaho was over the hotspot. Geologists have found evidence of a caldera related to Yellowstone in southern Idaho. There are theories that put northern Nevada over the ancestral hotspot 42 million years ago. Remember, the continental plates are always moving. It would make life easier for geologists if they stayed in one place.

It’s just too much of a coincidence. The age of the Carlin-type gold deposits is the same age as when northern Nevada was over the ancestral hotspot. If the gold deposits are related to the Yellowstone hotspot and the surface expression of the hotspot has moved, then a good place to look for more Carlin-type deposits is to follow the movement of the surface exposure of the hotspot from where it was 42 million years ago to where it is today. Now you understand why I was in Idaho this summer. It wasn’t the fishing, although that is an added bonus, just like the bison, wolves and grizzlies of Yellowstone.

This research season, I hope to contribute an article every two weeks to the Kingman Miner. The articles will include topics of Mohave County geology and other related subjects that I think will be of interest to other rockhounds like me.