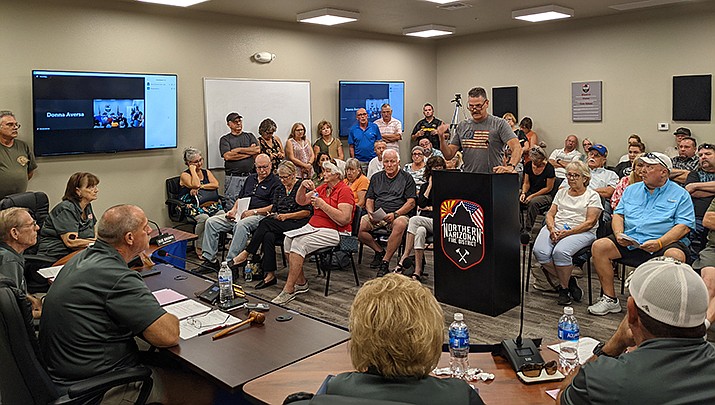 The Northern Arizona Fire District saw no shortage of participation at its public hearing Thursday, Sept. 16 regarding the proposed formation of a new district for the Valle Vista, Hackberry and Truxton areas. (Photo by Travis Rains/Kingman Miner)

KINGMAN – The Northern Arizona Fire District held a public hearing on Thursday, Sept. 16 regarding the proposed formation of a new district for the Valle Vista, Hackberry and Truxton areas. Proponents and opponents of the effort voiced their opinions in a packed room at 2600 Northern Ave.

The area generally follows Route 66 through the communities of Valle Vista, Truxton and Hackberry. The proposed district is approximately 29 square miles in size.

According to a news release from proponents, one goal is to restore service to the three closed fire stations by utilizing volunteer firefighters, while also retaining the two full-time personnel on duty at the Concho Drive station.

On Thursday, residents of the district had the opportunity to tell their fire board how they felt about the proposition. Some proponents voiced their opinion that they favored the formation of the new district because of concerns over transparency and response times. Some also felt that the more a fire department is localized, the better.

Opponents of the formation, who repeatedly voiced their appreciation for the board, district and its firefighters, were concerned about how the effort would be paid for. While an impact statement for the proposal has been submitted, opponents said finances were not adequately addressed in any of the documentation.

In line with finances were concerns over staffing stations should the proposal come to fruition. Staffing just one firefighter at a station can run as much as $75,000 per year, explained board members and fire personnel. NAFD board members also relayed the struggles the district has seen in recruiting volunteer firefighters, with opponents sharing their concerns that similar issues could be lying in wait for the new district should it be formed.

Fire District attorney Donna Aversa also shared with the elected representatives and the meeting’s attendees what exactly the board needed to consider in relation to approving or not approving the impact statement through a reading of state statute.

“If the governing body determines that the public health, comfort, convenience, necessity or welfare shall be promoted, it shall approve the impact statement and authorize the circulation of petitions … ”

She continued, saying that if the board were to not approve the impact statement, the effort could be refiled after six months.

“Think about the law of unintended consequences,” said John Bryant, board member. “If you get out of this, and for some reason you cannot make it, you might be without any fire protection out there at all.”

The board decided to table its vote on the impact statement until a special meeting set for Monday, Oct. 4.