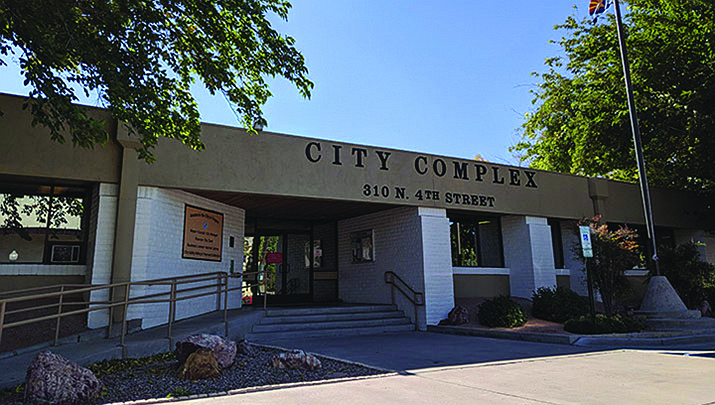 Kingman City Council will meet at 5 p.m. Tuesday, Sept. 21 in the council chambers at the city complex at 310 N. Fourth St. in Kingman. (Miner file photo)

KINGMAN – City council will meet on Tuesday, Sept. 21 at 5 p.m. in council chambers at the city complex, 310 N. Fourth St. Council will consider a request to waive the requirement to extend sewers to new subdivisions.

The Sewer Policy Statement states new subdivisions within the City Water Service Boundary “shall provide for the discharge of domestic and other liquid waste in the municipal sewerage system.”

It also states new subdivisions inside or outside city limits will not be granted water service if they are not served by a central sewage collection system.

Prior to policy alterations in 2011, the policy was the same, except lots 20,000-square-feet or more could have septic tanks. The policy changed in 2011 because city council wanted to connect as many homes as possible to the sewer system so wastewater would have the ability to be reused.

Staff argues current policy standards should be followed and kept “consistent” so exceptions aren’t made that could change the adopted policy.

Council may also approve an agreement between the fire department and Mohave Community College’s Fire Academy for facility use of Fire Station 2 for educational purposes and to utilize the equipment. The fire department is asking for fire service fees to be waived except for certain costs.

The fire department is also seeking approval on an agreement between KFD and Hualapai Nation Fire Department. HNFD would utilize the training room in Fire Station 2 for a three-day training program held by Insight Fire Training. The department is seeking fees to be waived for the training in exchange for eight full student registrations for KFD.

Council will also decide whether to complete the Hilltop Wastewater Plant Recharge Well and Equipping Project with Felix Construction Company, which will add additional drainage, disinfection and discharge piping, gauges, valves, fittings and related items at a cost of $1.6 million. They will also decide whether to approve the effluent motor control cabinet upgrades at Hilltop Wastewater Treatment Facility at cost of about $101,000.

Staff will share reports on fleet management and vagrancy.