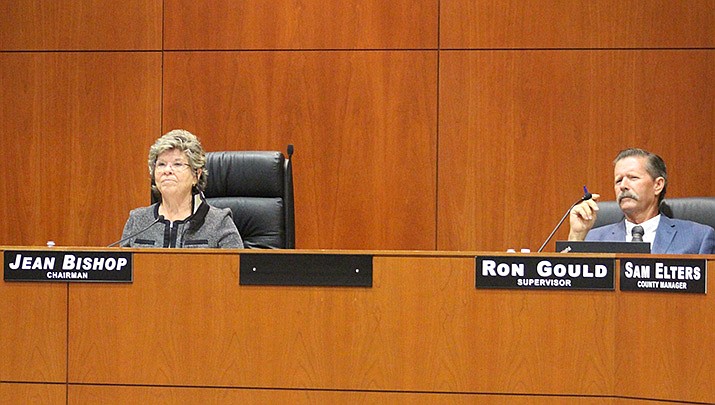 The Mohave County Conservatives Political Action Committee hopes to gather enough signatures for a ballot initiative to enact term limits on members of the Mohave County Board of Supervisors. (Miner file photo)

KINGMAN – There are no term limits for members of the Mohave County Board of Supervisors. Instead, there’s only the simple fact that members of the county’s governing board are there, until they’re not.

The Mohave County Conservatives Political Action Committee will seek a ballot initiative next year to limit the amount of time supervisors can serve on the county’s governing board. But to get it, the committee will have to acquire 10,739 signatures from Mohave County residents before July 8.

“This idea is way overdue,” said Committee Chairman Steven Robinson in a written statement this week. “When officials are in office for five, six or even seven terms, we don’t have new ideas or a fresh perspective on county issues. Elections aren’t real term limits, because incumbents have an overwhelming advantage. Elected officials stay in office so long, they think they ‘own’ the seat.”

In a Friday interview, District 4 Supervisor Jean Bishop said Robinson’s goals may not be entirely altruistic. Bishop served the remaining two years of her predecessor’s term in 2014, and is now into her second elected term on the board. When that term ends in 2024, Bishop says she intends to retire.

“(Robinson) has tried to have me recalled twice, and now he’d like to term-limit me,” Bishop said. “But this is my last term. Ten years is plenty.”

Bishop said that she respects the right of voters to decide whether term limits should be imposed. But she said that doing so could rob the county of skilled, experienced leaders.

“In your first term, you’re really learning the job,” Bishop said. “It’s in the second term that you’re actually doing things. If there’s a limit, maybe it should be three terms. Experience can’t be taught. And if you’re in it for the right reasons, and you’re helping your constituents, they should have the ability to re-elect you if they choose to.”

Former state senator and current Mohave County Supervisor Ron Gould said he could see both sides of the argument.

“It’s a mixed bag,” Gould said. “There’s something to be said for experience, but there’s also something to be said for new ideas. I think term limits are fine, but what I saw in the legislature is that with term limits, nobody’s around long enough for there to be an institutional memory of them. When that happens, the legislature gets turned over to staff and lobbyists.”

Robinson spoke with Today’s News-Herald about the issue on Saturday.

“We have term limits for statewide officers, but in Mohave County we have people on their fifth, sixth or seventh terms,” Robinson said. “That’s too long to be in office. We need new ideas and solutions to new problems.”

Regardless of whether county residents vote for or against term limits for county officials, Robinson said that citizens should have the right to vote on the issue - even if there is no state statute permitting such a vote at the county level.

“This is a large county - the fifth-largest in the country,” Robinson said. “There are a lot of people in local government, and that’s where they can learn procedure. But what we need is people with an independent attitude … under Title 9 (of Arizona’s Revised Statutes), cities and towns can impose term limits. If it’s appropriate for cities and towns, it’s certainly appropriate at the county level, even if it’s not in the statute.”

Robinson said Saturday that he has no personal agenda against Bishop, herself. According to Robinson, he aided efforts to recall Bishop last year, but those efforts were led by Golden Valley conservative Robert Hall.

Board members including District 2 Supervisor Hildy Angius and District 3 Supervisor Buster Johnson could potentially be most affected if such a decision were made by Mohave County voters. Angius is now serving her third term, while Johnson is now in the middle of his sixth term on the board.

Johnson, who has served on the board of supervisors for more than two decades, gave no argument for or against possible term limits on members of the county’s governing board. But according to Johnson, such an election must be issued through the state.

“Anyone can pull papers for a petition, then they have to get the prescribed number of valid signatures, then it’s reviewed to see if it’s legal,” Johnson said. “If someone is truly interested in term limits, it needs to legally be done at the state level.”