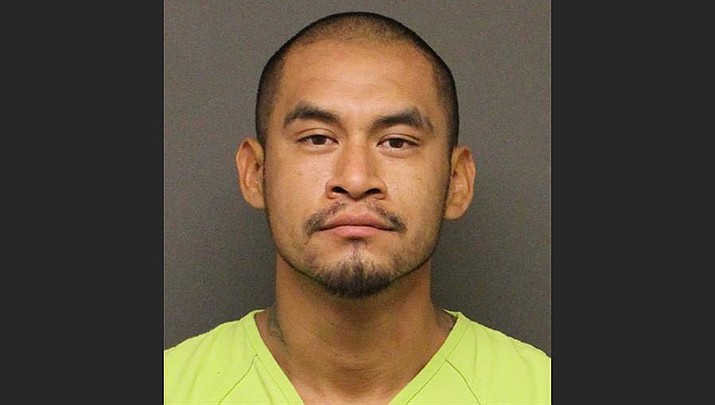 KINGMAN – Rudy Nicholas Molina, 30, of Bullhead City, was arrested by the Mohave County Sheriff’s Office on Tuesday, Sept. 21 after allegedly setting fire to a home in the 4500 block of S. Puetro Verde Drive in Fort Mohave.

MCSO wrote in a news release that at 6 p.m. deputies observed a disturbance in progress at Camino Colorado and Highway 95 involving an unknown male subject and a blue Mustang. According to law enforcement, the male subject approached the Mustang and began hitting it with his hands.

Deputies approached and heard the male subject yelling that the passenger of the Mustang had set fire to a residence and was attempting to flee the scene. The Mustang continued on and a traffic stop was conducted in the 4400 block of Highway 95.

Deputies contacted the passenger, identified as Molina. A records check reportedly revealed Molina to have an active felony warrant, and he was detained and placed in a patrol vehicle.

Law enforcement wrote that following interviews, it was revealed that Molina had set fire to a home in the 4500 block of S. Puetro Verde Drive. Neighbors of the residence advised they observed the fire and saw Molina running from the scene.

While conducting interviews, deputies reportedly observed Molina standing outside the patrol vehicle. When spotted, Molina is alleged to have fled on foot. A foot pursuit ensued with Molina running across all lanes of travel on Highway 95, MCSO wrote. Molina is reported to have jumped multiple fences, at which time deputies lost sight of him.

A perimeter was established around the last known location. A short time later, deputies received a call that a male subject was hiding in the restroom of their business and had been told to leave by employees.

The male subject is then reported to have entered a shed on the property. Deputies arrived and detained Molina, transporting him to the Mohave County jail on suspicion of arson of an occupied structure and 2nd degree escape, both felonies, as well as an active felony arrest warrant.