Outdoors column: Beware of scammers when shopping for ammo online 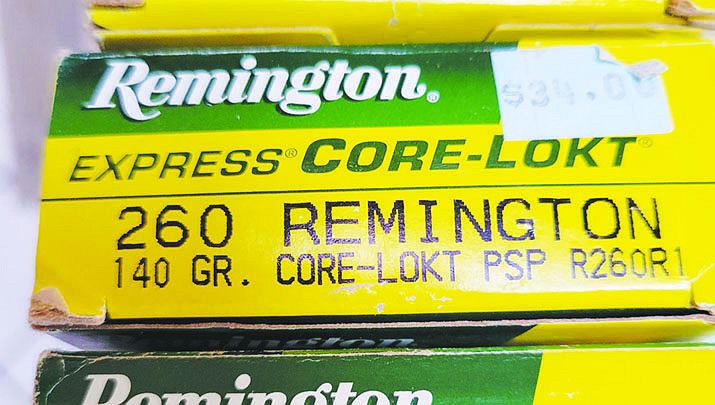 Most sportsmen, including myself, are always looking for ammunition. Whether for hunting or self-defense, a lot of types of ammo just aren’t found in our local gun shops.

I recently learned that my 12-year-old grandson who lives in Oklahoma had drawn a youth antlerless elk tag in game management Unit 6A.

This is the second year in row he has drawn an Arizona elk tag.

Last year he was successful, but had a very tough hunt in Unit 10.

On that hunt he used a Remington Model 7 youth rifle with a shortened fiberglass stock. It fits him perfectly and is chambered for .260 Remington caliber. It was the pre-cursor to the now very popular 6.5 Creedmoor round.

I wanted to pick up a few boxes of the factory Remington ammo with the 140-grain bullet that Remington makes.

Checking with our local gun shops failed to produce any of that particular ammo. It’s no wonder, as that ammo is only produced one day a year by Remington.

So, I decided that I would go online and see if any of this ammunition was available. I’ve seen several advertisements from individuals who said they had hard to get ammo.

It was then that I found out something interesting.

Three different people responded to my inquiry about the availability of this particular ammunition.

All said they had it and at a price lower than most gun shops.

Being a little bit skeptical, I asked each one of them for the name, address and telephone number of their business.

None produced that information, only asking this question: “You ready to order the ammo? All we need is your name and credit card number!”

So, once again I asked for the information I had previously requested.

Two of the people immediately quit responding. A day later one of them, purported to be out of Ohio, sent me an address and telephone number. I tried to call the number provided and no one ever answered the phone.

At that point, that person quit corresponding with me.

While I’m sure not all online offers are scams, it was obvious these were.

It’s called “phishing” and it is a multi-billion-dollar operation that steals from individuals and businesses worldwide.

I got lucky as I didn’t provide them with any information.

My advice is this. Only do business with people or businesses that you’ve worked with before or you know that are reputable.

Giving someone you don’t know your credit card numbers and your name to ostensibly save a few dollars is a recipe for disaster.

And while this is a common scam nowadays, think and do a little checking before you purchase anything – even hard-to-get ammunition- online from someone you don’t know.

Don’t be a victim of scammers!