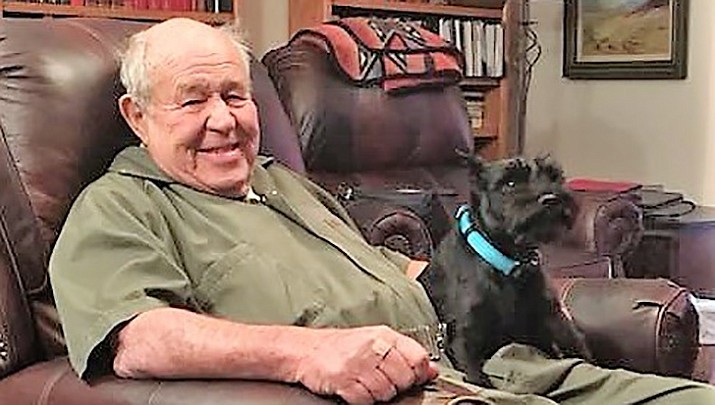 Edward Dene Pattillo, “Eddie Dene” to his friends, passed away peacefully at home on Friday April 15, 2022. His services will be at the Elks’ Lodge at 900 Gates Ave. on April 27 at 11 a.m. A graveside service will follow with a reception at the Elks Lodge. There will be a visitation on April 26 from 5-7 p.m. at Sutton Funeral Home.

Eddie was a 27-year cancer survivor. He was a downwinder who fought over 50 years to get justice for the victims of Lower Mohave County from the U.S. government’s careless actions in the 1950s which exposed the entire area to radiation for over a decade.

Eddie was a third-generation Kingman native who was born in the Mohave County Hospital on Feb. 8, 1939 to Henry Dene Pattillo and Lillian M. Pattillo. He graduated from Mohave County Union High School in 1957 where he lettered in football. His family now has three generations of Kingman natives with the addition of his great nephew Riley Ferry-Finn.

Eddie was a beloved father, husband, brother and son. He is survived by his wife of 57 years, Mary Jane Hobbs-Pattillo, and his three children, Kim, Cullin and Sally Pattillo (his favorite mini schnauzer). He is also survived by his nephew Sean Davis and great nephew Finn Davis of Tucson. Eddie was preceded in death by his parents Henry Dene Pattillo and Lillian Maloney-Pattillo, and sister Sharon Pattillo-Davis, who was also a downwinder.

Dad was a lifetime member of the Elks Lodge #468 for 63 years and a brother of the Masonic Temple #22 for 56 years. He was Exalted Ruler of the Elks Lodge in 1973. Dad was a member of the Delta Chi Fraternity at the University of Arizona. He graduated from the University of Phoenix with a bachelor’s degree in business administration. He was a member of the Mohave County Hospital District Board and Municipal Utilities Commission for the City of Kingman. Dad was instrumental in forming the Mohave County Economic Development Authority and was a founding member of that board as well.

Dad had many careers and areas of expertise. He was a lifeguard on Lake Mohave and at the swimming pool in downtown Kingman. He worked for John Jordan Engineering where he helped survey most of Mohave County. He went to work as a cartographer for Mohave County. Then he was an insurance agent for Valley National Insurance for 23 years. Dad finally moved on to the field of construction management for Specialty Contractors and Thunderbolt Construction until his retirement.

Dad had mad skills. He could do just about anything he put his mind to. When he retired, he started his outdoor wellness program fixing and landscaping his daughter Kim’s house and his own residence in downtown Kingman. He could do plumbing, electrical work, masonry, surveying, roofing – you name it and he could do it. These things kept him busy and helped him stay young.

Dad was well known for his quick smile, gourmet cooking skills and wicked sense of humor. His favorite joke came from a friend of his mother, Ollie Bond, who saw him moving into his last residence on Grandview a block away from his childhood home. She stopped and spoke to him as he was moving in and said: “Boy, you sure didn’t go very far in life.” His response was, “I went as far as I could without crossing the street.”

Dad was a truly great human being who made the world a better place.

He is dearly missed by his family, friends and brothers in the Elks Lodge and Masonic Temple.