A Black beekeeper in Phoenix and her Baehive Sisterhood 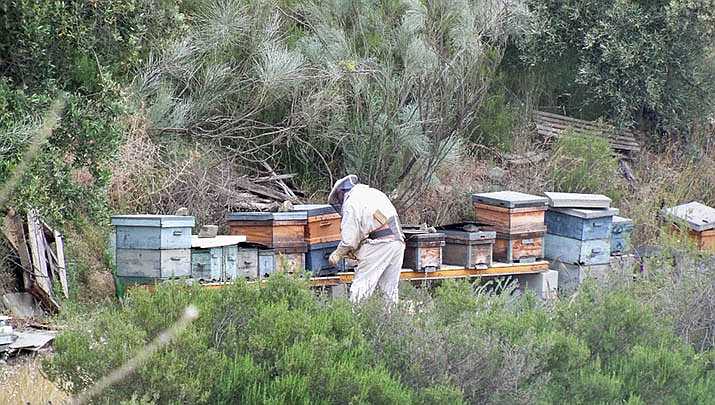 PHOENIX - Every other Sunday, a group of women wearing black T-shirts that read “Baehive Sisterhood” pull on white bee suits behind the Orchard Learning Community Center in south Phoenix.

The school teachers, doulas, homeschool moms and urban farmers never expected they would be inspecting 12 honeybee hives at 8:30 a.m. on a hot weekend morning with sweat dripping down their faces.

But what started as a project aimed to educate children about farming has blossomed into a sisterhood thanks to Chanika Forté , who made it her mission to empower, support and provide apicultural education to women of color.

Since graduating from Forté‘s honeybee course, the bees have become part of their lives.

Some women have failed and some have successfully tried to catch a swarm of bees, others now have beehives in their backyards, but all the women have learned the benefits of being surrounded by hives.

After being let go from a district analyst position at U-Haul in 2010, Forté returned to school to become a life coach. She followed the footsteps of the women before her when she enrolled in the Southwest Institute of Healing Arts in 2014 and took up urban farming.

For seven generations, the women in her family have farmed in Alabama and in her home state of Michigan. But, it wasn’t until recently that Forté realized she “didn’t just stumble” into farming.

I’m a replica of the women who came before me, and I didn’t even know it,’ she said. “There’s comfort in that because I know that there are times where I doubt myself, and I will never doubt myself again. I know I’m doing what I’m supposed to be doing. I know that it’s in my DNA to do this — and I’m going to ride it till the wheels fall off.”

Forté found her way into farming while completing an externship at St. Vincent de Paul in college. The mother of four never wanted to leave its urban farm. She was there when the gate opened and there until it closed.

“When they were closing the gate, I was like, ‘Can you please keep it open for 15 more minutes,″ she recently told a crowd during a panel celebrating Black farmers.

Forté found a sense of purpose as she harvested food for families experiencing things she also went through as single mother raising children in housing projects. She remembered waiting on buses to get to the grocery store and debating which bills to pay. At the farm, she knew she was eliminating someone else’s need to decide what food to give their kids and worries about feeding their children healthy options.

Forté worked at St. Vincent de Paul for almost two years as part of AmeriCorps’ Public Alliances apprenticeship program, which payed a stipend for her to work at the nonprofit. She was hired as an urban farm program manager and community involvement coordinator in 2017. At that time, she managed the Human Service Campus’ urban farm. Two years later, she was promoted and now manages all three of its urban farms.

On her journey, she noticed a lack of diversity in the industry, so she set out to empower women to engage with sustainable beekeeping and gardening as a way to generate additional income and teach their communities the importance of farming.

In 2017, Forté was looking for a way to increase St. Vincent de Paul farm’s production without adding chemicals when she learned that adding bees to the farm can increase production from 10 to 20%.

Since completing her training, the 41-year-old Forté added four beehives to the nonprofit’s urban farms, including a swarm of bees she caught on the Human Services Campus.

As she fell in love with bees, she began teaching people seeking services from the nonprofit the importance of beekeeping.

Forté also had noticed a lack of diversity in the beekeeping world.

Forté set out to connect with other Black beekeepers, posting in a local beekeeper group on Facebook, asking if there were any other beekeepers of color in Arizona. She said the responses to the post surprised her.

“There are not a lot of Black beekeepers and one reason is due to access to land,” Forté said. She also said there is a disconnect between Black people and agriculture because of its connection to enslavement in the United States.

“It was used against us and we don’t want to be associated with something that was used to control us,” she said.

Forté launched ABC Mobile (short for Agriculture, Bees and Composting) in 2019. She wanted to build something to pass down to her children and she thought creating a nonprofit where she would travel to schools in a converted school bus to teach children about pollinators, how to grow seeds and the importance of composting would become a part of her legacy.

In the fall, Forté teaches a six-week course during which women learn how to identify different bees, how to complete a hive inspection and the history of beekeeping in Africa. Her students have ranged in age from 7 to 65 years old.

“There are more Black beekeepers in Arizona now,” she said. “And a lot of them are women."