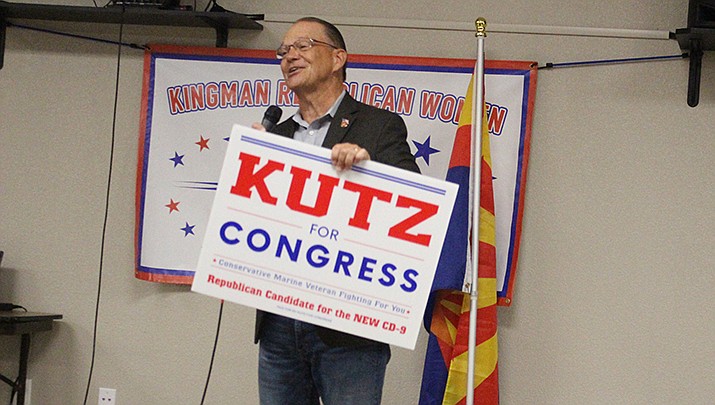 KINGMAN - A variety of state candidates echoed what they claimed to be the most important issue they face - keeping local control – at an event in Kingman the day before the state’s Primary Election on Aug. 2.

At the Monday, Aug. 1 Republican Women of Kingman meeting, candidates explained what they will do to keep political decisions in Arizona in the hands of conservatives, on issues like elections, immigration and abortion.

Attorney General candidate Lacy Cooper said with the overturn of Roe v. Wade taking effect, she wants to work with the Legislature if elected to make it so she has the authority to prosecute abortion cases instead of county attorneys in case they do not want to prosecute those who perform an abortion.

With both a pre-statehood law and a 2022 law banning abortions and contradicting each other, Cooper said it will be her job to enforce whatever law takes effect. However, she said the reality of Roe v. Wade being overturned is a shock to her and elected officials, despite the 2022 Arizona Legislature passing a law that bans abortions after 15 weeks.

“I have a feeling that the Arizona State Legislature is going to make some changes in the future to clean up our abortion laws because they also didn’t know we’d be in a situation where we might actually be able to protect life,” Cooper said.

Featured speaker gubernatorial candidate Kari Lake was a no-show for the meeting due to a scheduling conflict, organizers said. According to Lake’s Twitter account, she hosted a rally in Tucson on Sunday, July 31 and in Phoenix on Monday, Aug. 1.

Instead, Lake sent in a video applauding Mohave County women and their efforts, calling on them to show up to go to the polls, claiming that she will restore the faith in elections, which she claims are fraudulent.

“Arizonans have flocked to the polls and we’ll overwhelm the system,” Lake said. “We’ve gotta win by a mile to eke out a one inch win in this corrupt system.”

State GOP candidates continue to ride on the narrative of a corrupt election system while also applauding people who dropped off their mail-in ballots. In June, a Mohave County Court judge rejected Arizona's GOP lawsuit to ban mail-in voting.

Rep. Leo Biasiucci (R- Lake Havasu City), who is running for reelection, encouraged people to vote, telling the crowd that he’s heard from Republicans who do not think their vote will count. He said he spoke with the Mohave County Recorder's Office which said that “about half” of the ballots mailed out in the county have been turned in.

“About half of the mail-in ballots have been returned, so that’s showing that either people are not going to vote, which makes me nervous, or they’re going to drop it off on the day of, which I’m OK with,” Biasiucci said.

Biasiucci also discussed his bills, and increasing the punishment for human trafficking and crimes against children. Marianne Salem (R- Kingman), a candidate for state representative in LD-30, said that if she grabs the seat being vacated by termed-out Rep. Regina Cobb (R-Kingman), she also wants to focus on laws surrounding human trafficking.

As a key founder of the Mohave County Human Trafficking/ Domestic Violence Coalition, Salem said she wants to continue to shed light on the issue of trafficking in Kingman and across the state. She said that to help combat human trafficking, the border also needs to be protected.

“We need to protect our border. We have so many people that are coming out thinking that they’re going to have an opportunity to have a new life, to have some freedom, and they’re being tricked,” Salem said about some immigrants.

U.S. House of Representative candidate Randy Kutz said that if elected to the seat currently held by Rep. Paul Gosar (R-Bullhead City), who is running for reelection, he wants to find long-term solutions for the border.

Kutz applauded the direction former President Trump took with the border, however, when it comes to executive action, there’s a time limit. If harsher border laws are developed in Congress, Kutz said they will last.

“It (Congress) is failing to follow its regular order and its constitutional authorities,” Kutz said. “So what we're left with is the executive branch running the show with executive action.”