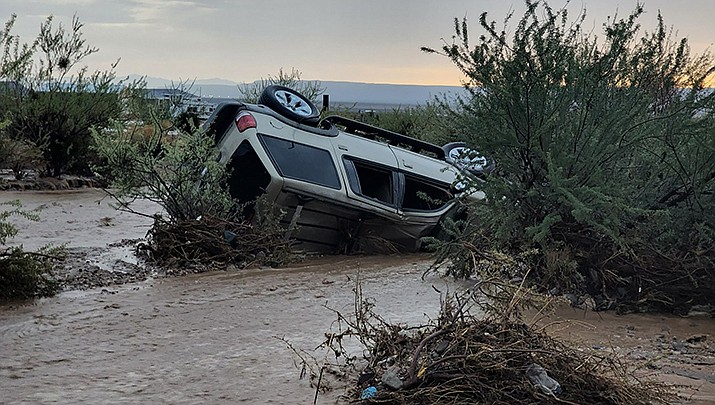 An overturned SUV is pictured during flooding near the intersection of Chino Road and Bosque Road in Golden Valley on Sunday, July 31. (Mohave County Sheriff’s Office Search and Rescue photo)

This truck got stuck on Sunday, July 31 at Shinarump Drive near Agate Road in Golden Valley. It’s the same location where a woman was rescued while clinging to the “DO NOT ENTER WHEN FLOODED” sign during flooding last week. (Mohave County Sheriff’s Office Search and Rescue photo)

Search teams responded to various locations, and there were several other vehicles that were observed that had also succumbed to the waterways. ”Flooded roadways are very dangerous, and those who survive them are very lucky,” search and rescue wrote on Facebook.

One incident occurred in a location that was also flooded last week. A truck got stuck and stranded on Shinarump Drive near Agate Road in Golden Valley. Last week, a woman was rescued while clinging to the “Do Not Enter When Flooded” sign that overlooks the roadway at the location.

“The risk involved when entering a flooded roadway is not worth losing your life, the life of your family members or friends, or any of the first responders that attempt to help. When you encounter water on a roadway, please turn around -- don’t drown,” search and rescue warned.

More than one-quarter inch of rain fell at the Kingman Airport, the official Kingman recording station for the National Weather Service, in the 24-hour period ending at 4:51 a.m. on Monday, Aug. 1. Rainfall levels have varied greatly in different parts of the Kingman area with localized monsoonal storms passing over in recent weeks.

It raised the rainfall total in the current calendar year to 3.87 inches at the airport, and there’s a 30% of additional rain today between 2 p.m. and 5 p.m., according to the NWS office in Las Vegas.

Expect a 10% chance of thunderstorms or showers on Tuesday, Aug. 2, and sunny skies on Wednesday.

The chance of rain returns on Thursday with a 30% chance, and there’s a possibility of showers and thunderstorms through the weekend.

High temperatures will range from 92 degrees on Monday and Friday to 97 degrees on Thursday, with overnight lows in the mid-70s.