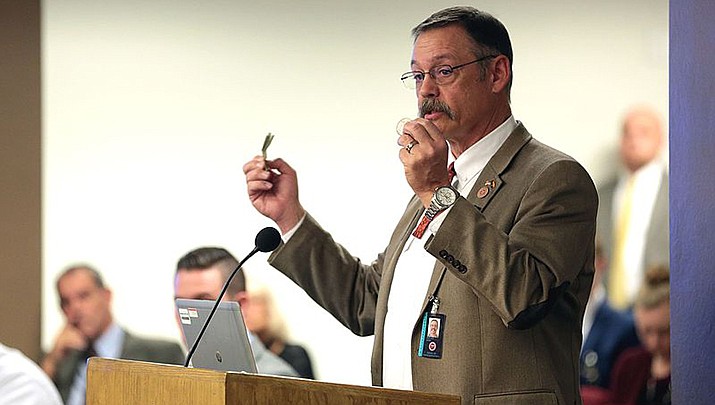 An Arizona lawmaker endorsed by former President Donald who believes the president’s claim that the 2022 election was stolen, GOP Secretary of State hopeful Mark Finchem, is one of two candidates in Tuesday’s Arizona primary election who supports such a claim. The Secretary of State position’s duties include oversight of elections. (Photo by Gage Skidmore, cc-by-sa-2.0, https://bit.ly/3h75J4z)

PHOENIX - An Arizona lawmaker endorsed by former President Donald Trump who attended the Jan. 6, 2021, rally that preceded the violent assault on the U.S. Capitol and another lawmaker who also believes the 2020 presidential election results should be overturned are among four Republicans vying for the top elections post in the presidential battleground.

It's a trend seen in several Republican primaries this year that has led to mixed results for those who peddle conspiracy theories and promote the falsehood that widespread fraud led to Trump's defeat. Tuesday's primary elections feature similar candidates in Kansas and Washington state.

In Kansas, voters will choose between a challenger who questions the 2020 presidential results and the incumbent Republican who believes the election was secure in his state. Washington state's open primary also has a candidate who backs Trump's unsupported claims, although that's not the toughest challenge the Democratic incumbent faces.

So far this year, Republican primary voters have split on whether to put election skeptics on the November ballot.

In June, Nevada voters selected former state lawmaker Jim Marchant, who has been repeating the false claims that the 2020 election was stolen from Trump, to face the Democrat in an open race for secretary of state. But in Colorado, GOP voters rejected a local election clerk who has been appearing with Trump allies promoting conspiracies about voting machines and instead chose a Republican who vowed to keep politics out of elections.

And Georgia Secretary of State Brad Raffensperger, who rejected Trump's plea to “find” enough votes for him to win the state, easily survived a primary challenge to advance in that state's May primary.

Arizona's secretary of state race is the most eye-catching and consequential of Tuesday's primary battles, in part because of Republican state Rep. Mark Finchem.

The retired Michigan police officer and current Arizona House member was at the Capitol on Jan. 6 and contends Trump lost Arizona because of rampant fraud. He backed a controversial and much-criticized state Senate “audit” of the 2020 election results in the state's most populous county and this year tried to get the Republican-controlled Legislature to notify Congress that Arizona wanted to decertify Joe Biden's election win.

Finchem also is suing in federal court with a leading GOP contender for Arizona governor to block the use of vote-counting machines in Arizona. The lawsuit contends they are potentially prone to hacking that can change votes. A judge is considering whether to throw out the case.

Finchem's claims come despite the lack of valid evidence of any widespread fraud that would have changed the result in Arizona, where Biden beat Trump by just over 10,000 votes. He maintains that “fictitious ballots” marred the results.

“So for you to say that there’s no evidence, I think the media is willfully disregarding the evidence that’s out there,” Finchem said.

His primary competitors include another state House member, Shawnna Bolick, a Trump supporter who contends the 2020 election was deeply flawed. She said in a televised debate that she would not have certified the election had she been secretary of state, despite it being a requirement to do so absent a court order.

The other two Republican candidates are state Sen. Michelle Ugenti-Rita, who acknowledges Biden's victory and has made election reform a key focus during her 12 years in the Legislature, and Beau Lane, a businessman and political newcomer who has earned the endorsement of Republican Gov. Doug Ducey.

Ugenti-Rita said none of the other candidates has her understanding of election law and that she believes she has broad support across the state.

“They immediately recognize my record and experience, and they feel assured that I can get the job done and that's the message,” Ugenti-Rita said about voters. "That’s what people want. They’re done with platitudes — it gets policy nowhere."

Lane said his executive experience makes him the best choice for the job. He noted his long engagement in Republican politics, back to when as a young man he was a page at the 1980 Republican convention in which Ronald Reagan was nominated for president.

"Above all, we need somebody who can be a fair dealer and help restore faith in elections," he said.

Lane said other than a few hiccups and isolated cases of voter fraud, the 2020 election was well run, although he joined the other Republicans in criticizing Democratic Secretary of State Katie Hobbs, who is seeking her party's nomination for governor.

“Was there organized, rigged fraud that that changed the outcome of the election?” he asked. “I have seen no evidence of that."

Two Democrats are seeking their party's nomination — former Maricopa County Recorder Adrian Fontes, who lost his seat in the 2020 election, and Arizona House Minority Leader Reginald Bolding. Both criticize Finchem and other Republicans who question the 2020 election results and say a Finchem victory would be dangerous for democracy.

In Kansas, Secretary of State Scott Schwab also is facing a challenge from his right in the state’s GOP primary.

Schwab is a former Kansas House member who has defended the use of ballot drop boxes, which Trump and other Republicans say are prone to misuse, even though there is no widespread evidence of that. He has dismissed baseless theories about fraud, at least as a possibility in Kansas elections.

“There were concerns that people had in other states, and some folks want to have that concern in Kansas, but they’re just rumors — ‘I heard this in Georgia. I heard this in Arizona, I heard this in Nevada, therefore Kansas,’” Schwab said during a recent interview. “And you can’t copy and paste situations from one state to the next simply because our statutes are so different.”

Schwab’s primary opponent is Mike Brown, a construction contractor and former county commissioner in Johnson County, the state’s most populous and home to Kansas City-area suburbs.

Brown has made doubts about the security of Kansas elections central to his campaign. He’s promised to ban ballot drop boxes and said he will use the secretary of state’s office to pursue election fraud cases, rather than taking Schwab’s approach of working through prosecutors.

Brown said that when Schwab says Kansas elections ran smoothly with no significant problems, the question is, “Because he said so, or because he can prove it?”

“His answer is, ‘There’s nothing to see here, keep moving,’” he added. “You should start looking and you should stop moving.”

Washington state's “top two” primary features Democratic Secretary of State Steve Hobbs, who was appointed by Gov. Jay Inslee last November and hopes to retain his seat for the remaining two years of former Republican Secretary of State Kim Wyman’s four-year term. He's the first Democrat to hold the office since 1965, taking Wyman's seat after she left for an election security job in the Biden administration.

Hobbs has raised the most among the candidates for the race so far, followed by Pierce County Auditor Julie Anderson, who is running as a nonpartisan and said she is the most experienced in running elections.

Among the Republicans in the race, former Sen. Mark Miloscia — he is now head of the conservative Family Policy Institute — has raised the most money. Republican Sen. Keith Wagoner trails Miloscia in money but has been endorsed by former Republican Secretary of State Sam Reed.

Hobbs has pointed to his experience as a Washington National Guard lieutenant and his months running the office to say why he’s best positioned to address issues ranging from cybersecurity concerns to election misinformation.

Anderson said she’s running as a nonpartisan because of the hyperpolarization across the country, saying that “we don’t need political parties in the secretary of state’s office calling balls and strikes at home plate."

Under Washington's primary system, the top two vote-getters advance to the general election in November, regardless of party. Results will likely take days to tally because it's an all-mail election.