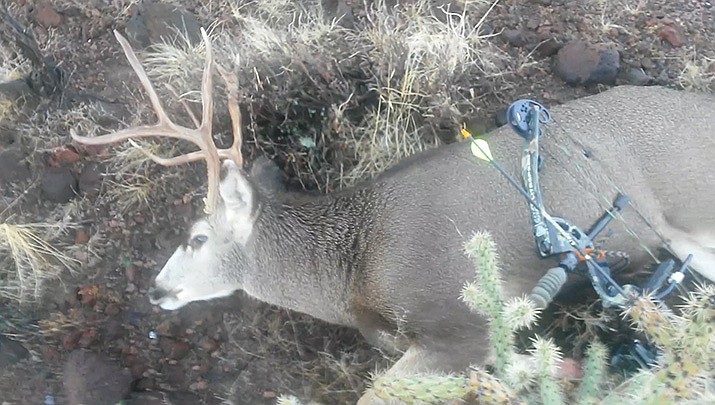 This 4x3 buck was taken on an archery hunt near Kingman. (Courtesy photo)

If you are one of many local archers who plans to go archery deer hunting this year, then you better read and understand the new regulations that are going into effect for this year’s two archery hunts.

Recently I spoke with Erin Butler, the Region 3 terrestrial wildlife program manager, who told me about some of the changes going into effect for this year’s archery deer hunts.

Butler said that the Arizona Game and Fish Commission, in response to requests made by some of the Arizona archery groups, wanted to see some changes made to the archery deer hunts and to limit the numbers of non-resident tags being issued.

During the hunt guidelines process the Department presented the Arizona Fish and Game Commission with 16 different options for managing the archery deer hunts.

Arizona archers did not want to see the over-the-counter archery deer tags to be issued through a draw process, so the Department offered up a harvest plan which called for a quota for all of the deer units in Arizona.

Those plans were approved by the commission at its April 1, 2022 meeting.

But now a number of local archers are unhappy with the harvest limits that have been set for a number of the local game management units.

The concern of some archers is they feel the quotas may be filled during the first hunt, when a lot of bucks are harvested over waters, while those that want to hunt during the December through January seasons will be shut out.

Butler, who is an avid archer, said that she and her husband, Dan, prefer to hunt in the later season.

Remember that these quotas are for the combined archery seasons, so the concerns of the local archery community may be valid.

The limited harvest system is rather detailed, as is the required check out of a successful harvest. It’s explained in a news release from AZGFD that is printed below.