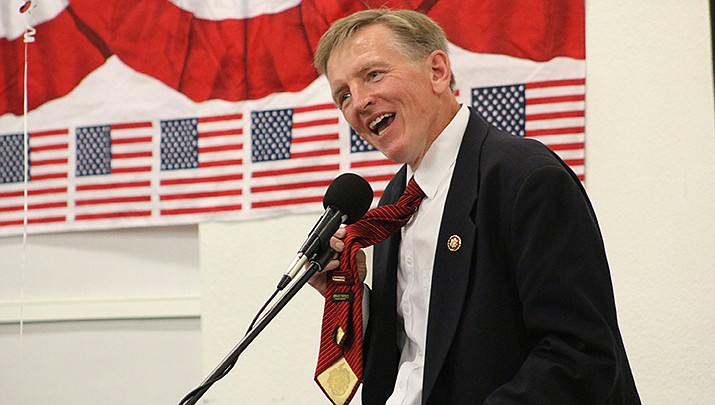 U.S. Rep. Paul Gosar has been declared the winner for the Republican nomination for his seat after Tuesday’s Arizona Primary Election. (Miner file photo)

KINGMAN - While official Mohave County results for the Aug. 2 Primary Election had yet to be released as of 9:30 a.m. on Tuesday, several winners are clear.

Mohave County elections staff counted ballots into the early hours of the morning, and the partial results listed are from 1:30 a.m. on Wednesday, Aug. 3 with counting 50% to 70% complete. Results include early ballots and a portion of ballots cast at polling places on Tuesday.

Kingman Miner reached out to the county for more information on when results will be released but did not hear back.

Several candidates had a wide lead over their opponents, including Rep. Paul Gosar, who was announced as the winner for U.S. House District 9 by the Associated Press. Gosar received 18,086 votes so far followed by 3,555 for Adam Morgan.

Rep. Leo Biasiucci is projected to win his re-election for Arizona House of Representatives LD30 with 17,635 votes. John Gillette has 6,511 votes, making him the frontrunner to fill the other LD30 seat formerly held by Rep. Regina Cobb.

Current Kingman Vice Mayor Ken Watkins is unopposed for the City of Kingman Mayor’s seat and received 4,144 votes so far. For the three Kingman City Council seats on the ballot, Shawn Savage received 3,310 votes and Marion “Smiley '' Ward received 3,009. The third seat will be taken by a write-in candidate, but it is unclear who is in the lead.

David Wayt leads with 2,198 votes for Mohave County Justice of the Peace, Cerbat, followed by Robert McEuen with 1,986.

While some seats are too close to call, several state seats have been confirmed. However, it is clear in Mohave County that Trump-endorsed candidates have a lead.

The Republican gubernatorial nomination flipped from Karrin Taylor Robson in the lead to Trump-backed Kari Lake. Based on the most recent numbers, Lake has 12,939 Mohave County votes and Taylor Robson has 11,174.

Blake Masters, candidate for the Republican nomination for U.S. Senate, was endorsed by Trump and received 10,687 votes in Mohave County by 1:30 a.m. on Aug. 3. Jim Lamon trailed with 8,758.

Abraham Hamadeh, Republican nominee for AG, has 7,931 followed by Rodney Glassman with 1,611 votes.

Tom Horne for Arizona Superintendent for Public Instructions leads with 12,288 votes followed by Shiry Sapir, a distant second with 7,663.