Masters will face Kelly for U.S. Senate seat in November 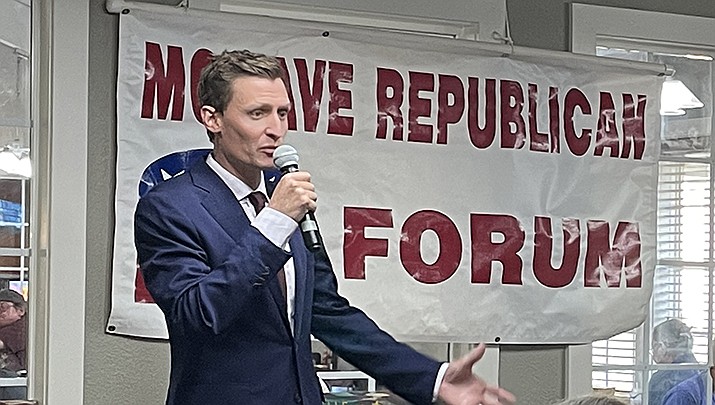 PHOENIX - Blake Masters will lead the bid by Republicans to take back control of the U.S. Senate.

The venture capitalist who said that Congress should not have certified the 2020 election of Joe Biden combined the backing of Donald Trump and financial support from tech giant and Pay Pal founder Peter Thiel to roll over businessman Jim Lamon, who largely self-funded his campaign.

The high-profile fight between the two left state Attorney General Mark Brnovich in the dust, finishing a distant third. Trump specifically snubbed Brnovich, claiming he had not done enough to investigate alleged irregularities in the 2020 race in Arizona.

Much farther back were Mick McGuire, the former adjutant general of the Arizona National Guard, and Justin Olson, a member of the Arizona Corporation Commission.

The outcome sets the stage for what is likely to be a bruising -- and very expensive -- fight with incumbent Mark Kelly who was unopposed in the Democratic primary.

As of the last report, Kelly, who already had taken to the airwaves months ahead of the GOP primary, had collected more than $51 million and still had almost $25 million on hand.

More is likely to be pumped into the race.

The Senate is barely in Democratic hands, with only the presence of Vice President Kamala Harris providing the tie breaker in the 50-50 body. And as much as Democrats want to maintain control, Republicans are anxious to be put back in charge.

Republicans also are expected to make a run at regaining control of the U.S. House, with two potentially promising races playing out in Arizona.

It starts with the open seat created in CD 6 by the decision of incumbent Democrat Ann Kirkpatrick not to seek a new term in the district that stretches from parts of Tucson through southeast Arizona.

Republican Juan Ciscomani who works for Gov. Doug Ducey in his Tucson office rolled over four others to become the party's nominee.

He will face off against former state Sen. Kirsten Engel who bested state Rep. Daniel Hernandez, himself a former aide to Gabrielle Giffords, who once occupied the seat.

The campaign already is beginning, with Tom Emmer, chairman of the National Republican Congressional Committee seeking to tie Engel to the unpopular President Biden and the Democratic Congress and “reckless spending that caused the price of gas and groceries to skyrocket.”

The other place where Republicans hope to gain some traction is in CD 2 where incumbent Democrat Tom O'Halleran finds himself in a district with a distinctly Republican edge after the lines were redrawn following the 2020 census.

Eli Crane, endorsed by Trump, came out ahead in the six-way race to be the Republican nominee in the district.

And in CD 1, incumbent Republican David Schweikert shook off a bruising campaign that aired findings of ethical violations on his part by his prior campaign, defeating two primary challengers. He will face off against Democrat Jevin Hodge.

In CD 3, Democrat Ruben Gallego had no primary opposition, with Jeff Zink running unopposed on the Republican side.

Incumbent Democrat Greg Stanton also face no opposition in CD 4, with Kelly Cooper leading the 5-person field among Republicans hoping to take him on in a district that, with new lines, leans a bit more Republican.

Rep. Andy Biggs also had no opposition in the Republican primary in CD 5, with Javier Ramos set to be his Democratic foe in November.

Also running unopposed in his primary in CD 7 was Raul Grijalva. with Luis Pozzolo winning the right to take him on in the heavily Democratic district.

And incumbent Republicans Debbie Lesko in CD 8 and Paul Gosar in CD 9 have effectively been reelected, with no Democrats set to take either of them on.