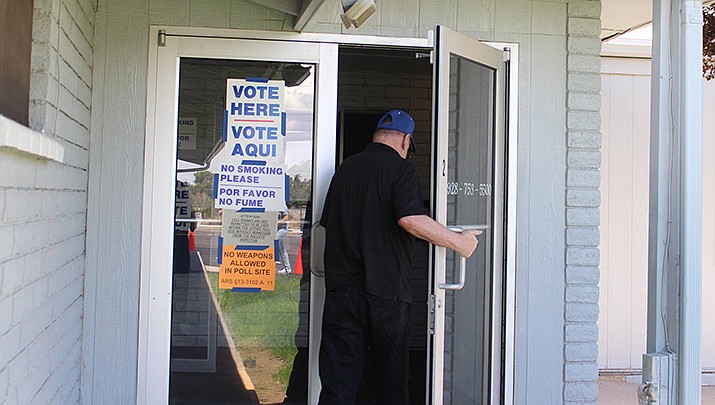 A voter enters the polling place at the Hilltop Foursquare Church in Kingman during the Arizona primary election on Tuesday, Aug. 2. (Miner file photo)

KINGMAN – As of 8:30 a.m. on Wednesday, Aug. 3 Mohave County Primary Election results are not yet available to the public, leaving the question of who won local elections up in the air.

As of 1:30 a.m. on election night, Mohave County Elections Director Allen Tempert said staff was halfway done with counts. According to the Associated Press, the counted votes around that time were actually 70%.

The county received 26,000 early ballots and 14,000 from the polls, according to county staff.

For those who reported on election night, those calling in numbers to Associated Press and Edison Research were given updates every two to three hours via a printed paper. Previously, updates were more consistently reported to the media.

However, Tempert said staff was doing the process differently because staff was busy and didn’t have time to give updates. As of 8:30 a.m., results had not been posted to the county website.

This process made it difficult for reporters to call in numbers to Associated Press and Edison Research, which distributes results over a variety of platforms.

According to a Mohave County press release sent out at 11 p.m. on Aug. 2, Tempert said the primary election was a “success” with only minor issues. By the time of that report, only early voting ballot results were available.

“No election is 100% perfect. Our staff and volunteers can be proud of their accomplishment. We’re going to be busy properly documenting everything over the next few days and then, we’ll concentrate on the upcoming general election in November,” Tempert said in the news release. “I’m confident that we’ll have a fair and well-run fall election in Mohave County.”