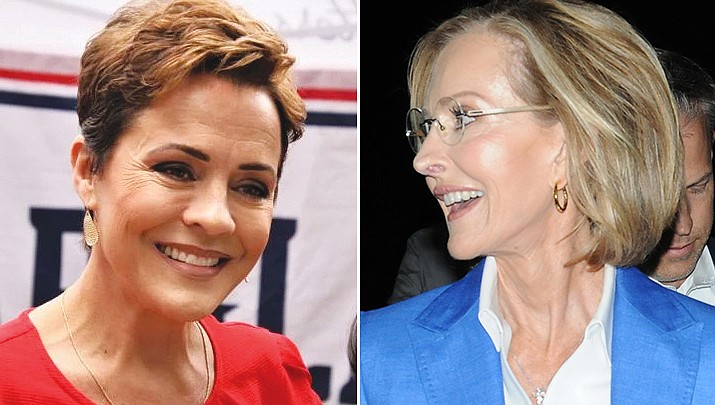 PHOENIX – Kari Lake declared victory Wednesday in the Republican gubernatorial primary even as votes were being counted and even as she continued to insist there is evidence of fraud in Arizona elections – evidence she would not share with the media.

“I’m not going to release it to the fake news,’’ she said at a press conference in front of her campaign office. “Why would I release it to a bunch of people who denied there was fraud when there was obviously fraud?’’

Instead she vowed to release it to “the authorities.’’

Lake late Wednesday had a lead of about 12,000 votes – less than 2 percentage points – over Karrin Taylor Robson.

But Lake pointed out she actually was far behind on election night when the only votes counted were from people who had cast their ballots early and by mail.

Lake said it was always her position that her supporters, suspicious of early voting just like both her and Donald Trump, who had endorsed her, would be the people who decided to go to the polls on election day. And those votes are counted later.

That proved to be the case.

As of Wednesday, only about 65% of Lake’s votes were cast by early ballot. By contrast, the figure for Robson was nearly 87%.

Still being tallied are the votes of people who did get early ballots but dropped them off on Tuesday at polling places.

Maricopa County Recorder Stephen Richer said these take time as the signatures need to be compared on envelopes with what the county has on file. Then they need to be scanned into the system.

The results, if they hold, set the stage for what promises to be a pitched battle with Democratic nominee Katie Hobbs. Lake cast the first salvo on Wednesday, blasting Hobbs, who is the secretary of state.

“She embarrassed the state of Arizona,’’ she continued, disregarding that it is officials in each of the 15 counties who actually run the event. “And she wants to take that incompetence that she’s shown as secretary of state and move it to the governor’s office?’’

Hobbs, for her part, is seeking to distinguish herself from Lake – and Robson – particularly over the issue of abortion, promising if elected governor to do what she can to keep the practice legal.

That, however, may not be her choice.

Lake pointed out Wednesday that when the U.S. Supreme Court overturned Roe v. Wade the justices simply sent the issue back to the states. And Arizona has had a law on the books since before statehood that make it a crime for a doctor to terminate a pregnancy other than to save the life of the mother.

Put another way, absent a court ruling voiding the pre-existing law, the new governor will have nothing to say about the issue.

Lake, who has called abortion “the ultimate sin,’’ sidestepped the issue of whether her views on abortion are in the mainstream, especially after voters in very Republican Kansas on Tuesday refused to remove protection for the procedure from their state constitution.

“We’re going to follow the laws on the books,’’ she said.

“If people don’t like the laws on the books, then they need to elect representatives who will change the law,’’ Lake continued. “I’m running for governor, not God.’’

But to defeat Hobbs, Lake acknowledged she will first have to unite the Republican Party after a particularly bruising primary where Taylor called her “fake Lake’’ and Lake called Robson a RINO -- a Republican in name only.

On Wednesday, Lake’s rhetoric had cooled as she held out an olive branch of sorts.

“I believe that Karrin will come in because I know for a fact that Karrin loves this state,’’ she said.

Lake also was reaching out to former Congressman Matt Salmon who quit the race even before early voting began and threw his support behind Robson in a bid to keep Lake from winning the primary. But his name remained on the ballot and he picked up 25,000 votes.

All that still leaves Lake with what has been a central issue for her as it was – and remains – for Trump: elections are not conducted fairly.

“I am not satisfied with how the election was run,’’ she said.

“We had major issues yesterday, major issues,’’ Lake continued. “And they’re being reported every day by voters.’’

“Didn’t you hear when happened in Pinal County?’’ he said.

That refers to the fact that more than a dozen precincts ran out of ballots.

County officials rushed to print new ones and said anyone who was in line when the polls were set to close at 7 p.m. would be allowed to vote. But that doesn’t address the question of how many people, told there were no ballots, simply left and never returned.

Lake spurned questions of whether that simply reflects incompetence versus actual fraud.

“I don’t expect, guys, to sit here with the fake news that has denied that we’ve had issues with our elections, fraud and corruption,’’ she said.

“I don’t expect to turn you guys around,’’ Lake continued. “You’re a lost cause.’’

She said, however, that Arizona voters “know what’s going on.’’

Separately, Lake is a plaintiff along with Republican nominee for secretary of state Mark Finchem in a lawsuit asking a federal judge to disallow the use of automated counting equipment and requiring that ballots be counted by hand. No date has been set for a hearing.

“I wish they didn’t give us the felt-tipped pens we know we don’t like,’’ she said, a reference to claims that the markers bleed through ballots or, more recently, that they don’t properly record votes.

That became an issue Tuesday as the Maricopa County Attorney’s Office sent a cease-and-desist letter to Gail Golec, a candidate for county supervisor, telling her she must stop advising people to steal the felt-tip pens that were being provided at polling places.

In a letter to the Scottsdale resident, Deputy County Attorney Joseph LaRue told her that telling people to steal the pens, specifically recommended for use, “is a deliberate attempt to interfere with election administration.’’ And he said it will delay vote tabulation of ballots cast at polling places “as the west ink (from regular pens) harms the vote center tabulation machines.’’

For her part, Golec said she was never intending to urge a criminal act.

“I never thought of it that way,’’ she told Capitol Media Services. “I did say replace it with a blue pen.’’

Golec said she believes the felt-tip pens don’t leave a sufficient mark, a move that results in ballots having to go into “adjudication,’’ where the ballot is examined and marked in a way they believe reflects the voter’s intent – and not necessarily by election workers but through the use of artificial intelligence.