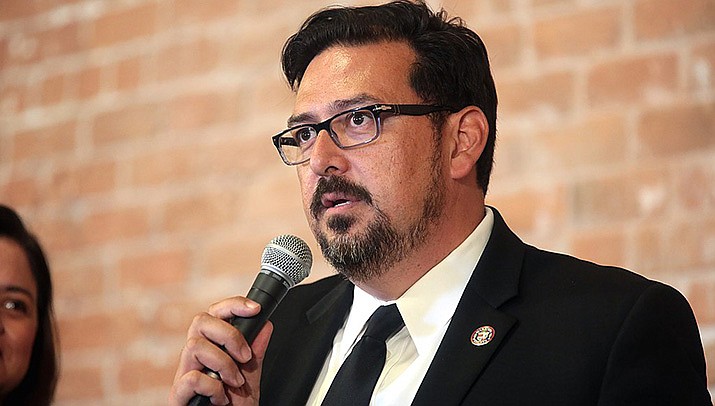 PHOENIX - Former Maricopa County Recorder Adrian Fontes has won the Democratic nomination for Arizona secretary of state and the right to take on a supporter of former President Donald Trump who believes the false narrative that the 2020 election was stolen from him.

Both Bolding and Fontes have warned that electing Finchem to the state's top election post would be a danger to democracy. Finchem was at the U.S. Capitol on Jan. 6, 2021, before Trump backers attacked Congress and has pushed for President Joe Biden's win in Arizona to be withdrawn, something that the law provides no way to do.

Fontes is a former Marine and attorney who ran ads saying he would protect voting rights for all Arizonans and that election deniers like Finchem were making a full-fledged attack on democracy.

Fontes oversaw parts of Maricopa County elections in 2020 but not the actual vote counting or polling sites. He lost his seat to current Republican Recorder Stephen Richer in the same election that Trump lost. Other than wins by Biden and Democratic Sen. Mark Kelly, Republicans did well in the county that year.

Finchem and other Republicans contend without evidence that Maricopa County's 2020 election was tainted by fraud. He has backed the state Senate’s discredited review of the election done by the state Senate and is part of a lawsuit trying to block the use of vote counting machines in state elections. A federal judge is considering whether to dismiss that case.

Finchem has said he only intends to ensure that election laws are followed to address concerns by many Republicans about how elections are run. Still, he tried to get the Legislature to overturn the 2020 election results and has spoken about making major changes to election rules that are written by the secretary.