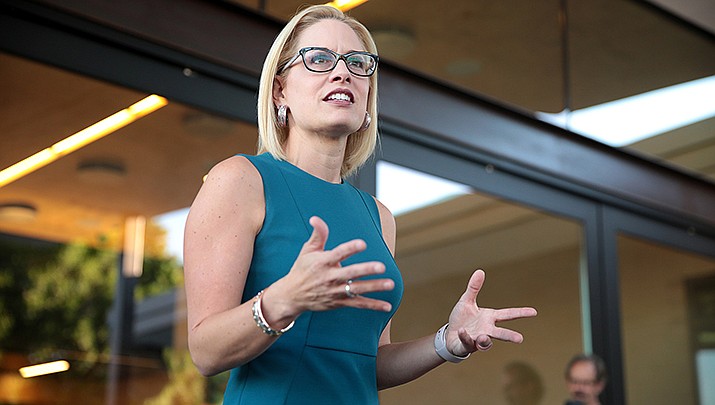 U.S. Sen. Kyrsten Sinema (D-Arizona) has signed on to the Inflation Reduction Act, which Democrats will try to pass in the Senate under the budget reconciliation process. (Photo by Gage Skidmore, cc-by-sa-2.0, https://bit.ly/3qRWtaG)

Democrats pushed ahead Friday on an estimated $730 billion package that in many ways reflects Sinema’s priorities and handiwork more than the other political figures who have played a key role in delivering on Biden’s signature domestic policy agenda.

It was Sinema early on who rejected Biden’s plan to raise the corporate tax rate from 21% to 28%, as she broke with party’s primary goal of reversing the Trump-era tax break Republicans gave to corporate America.

Sinema also scaled back her party’s long-running plan to allow Medicare to negotiate lower drug prices with the pharmaceutical companies as a way to reduce overall costs to the government and consumers. She limited which drugs can be negotiated.

Her insistence on climate change provisions forced the coal-state Manchin to stay at the table to accept some $369 billion in renewable energy investments and tax breaks. She also is tucking in more money to fight Western droughts.

And it was Sinema who in one final stroke gave her blessing to the deal by extracting an ultimate demand – she forced Democrats to drop plans to close a tax loophole that benefits wealthy hedge fund managers and high-income earners, long a party priority. Instead, the final bill will keep the tax rate at 20% instead of hiking it to the typical 37%.

“Kyrsten Sinema’s proven herself to be a very effective legislator,” said Sen. Mark Warner, D-Va., who has negotiated extensively with his colleague over the past year, including on the tax loophole.

In a 50-50 Senate where every vote matters, the often inscrutable and politically undefinable Sinema puts hers to use in powerful ways. Her negotiating at the highest levels of power – she appears to have equal access to Biden, Senate Majority Leader Chuck Schumer and even Senate Republican leader Mitch McConnell – has infuriated some, wowed others and left no doubt she is a powerful new political figure.

While other lawmakers bristle at the influence a single senator can wield in Congress, where each member represents thousands if not millions of voters, Sinema’s nod of approval late Thursday was the last hurdle Democrats needed to push the Inflation Reduction Act forward. A final round of grueling votes on the package is expected to begin this weekend.

“We had no choice,” Schumer told reporters Friday at the Capitol.

Getting what you want in Congress does not come without political costs, and Sinema is amassing a balance due.

Progressives are outraged at her behavior, which they view as beyond the norms of sausage-making during the legislative process and verging on an unsettling restacking of party priorities to a more centrist, if not conservative, lane.

Progressive Rep. Ruben Gallego is openly musing about challenging Sinema in the 2024 primary in Arizona, and an independent expenditure group, Change for Arizona 2024, says it will support grassroots organizations committed to defeating her in a Democratic primary.

“The new reconciliation bill will lower the cost of prescription drugs,” Gallego wrote on Twitter last weekend. “@SenatorSinema is holding it up to try to protect ultra rich hedge fund managers so they can pay a lower tax.”

In fact, on the left and the right, commentators lambasted her final act — saving the tax breaks for the wealthy. Some pointed to past legislative luminaries – the late Sen. Robert Byrd, for example, used his clout to leave his name on roads, buildings and civic institutions across the West Virginia hillsides. They scoff at Sinema establishing her legacy in such a way.

“Astonishing,” wrote conservative Hugh Hewitt on Twitter. “@SenatorSinema could have demanded anything she wanted – anything that spent money or changed taxes – and with that leverage for Arizona she choose … to protect the carry interest exemption for investors. ... Not the border. Not the country. A tax break. Wow.”

But Sinema has never cared much about what others say about her, from the time she set foot in the Senate, breaking the rules with her whimsical fashion choices and her willingness to reach across the aisle to Republicans — literally joining them at times in the private Senate GOP cloakroom.

The Arizona senator seeks to emulate the maverick career of John McCain, drawing on his farewell address for her maiden Senate speech, and trying to adopt his renegade style alongside her own – a comparison that draws some eyerolls for its reach and scope.

Still, in her short time in the Senate, Sinema has proven herself to be a serious study who understands intricacies of legislation and a hard-driving dealmaker who does not flinch. She has been instrumental in landmark legislation, including the bipartisan infrastructure bill Biden signed into law last summer.

In the end, the final package is slimmer than Biden envisioned, but still a monumental undertaking. The bill would make health care gains for many Americans, capping pharmacy costs for seniors at $2,000 out of pocket and providing subsidies to help millions people who buy health insurance on the private market. It includes what the Biden administration calls the largest investment in climate change ever, with money for renewable energy and consumer rebates for new and used electric cars. It would mostly be paid for by higher corporate taxes, with some $300 billion going to deficit reductions.

On the climate provisions, a priority for Democrats, Sinema may have played a role in keeping the sweeping provisions in the bill, when Manchin was less inclined to do so.

Environmental leaders, who have been involved in talks on the bill since last year, said Sinema has helped shape the bill all along. She was especially helpful last year when she made it clear she supports the climate and energy provisions, and her commitment to climate issues has remained steadfast, environmentalists said.

She tacked on her own priority, money to help Western states dealing with droughts, in the final push.