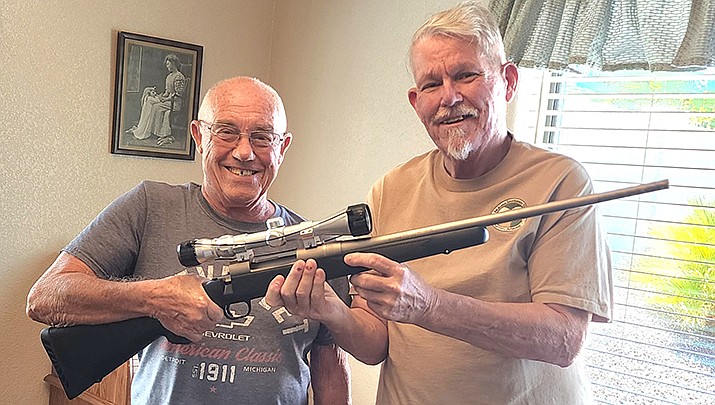 In the past I’ve written several articles about a program for Arizona veterans that I am very passionate about. It is called Heroes Rising Outdoors and it is a program that the Arizona Elk Society uses to put disabled Arizona veterans out on outdoors experiences that the veterans want to participate in.

These activities range from hunting and fishing to camping. It is whatever the veteran wants to do.

But many of the vets don’t have the clothing or equipment needed to have a quality outdoor experience and that’s where the AES comes in.

AES has this program that allows folks to donate clothing and equipment to them, and they in turn will distribute it to veterans.

Winter clothing was one of the most sought-after items, but I’m proud to say that due to the generosity of many Mohave County residents, AES no longer needs clothing.

My brother Gary Matin, who lives in Golden Valley, recently took down a load of donated clothing and equipment to the AES, and I also took down a car loaded with clothing, including jackets, camo pants and shorts of various sizes, and pairs of boots.

But I also had a very special item that I delivered to them.

I had received a call from Lake Havasu City resident Ed Murray who said that he had an almost new firearm that he wanted to donate to the Heroes Rising Outdoors program.

I made arrangements to go to Havasu and pick up the firearm.

Murray told me he purchased the Mossberg stainless steel rifle in .270 Winchester caliber for his grandson to use on deer hunts. Murray said his grandson found that hunting deer was a lot of work, so he didn’t want to go anymore.

Murray decided that after reading an article I had written about the Heroes Rising Outdoors Program in the local paper, he would donate it to AES.

Initially I thought the donation was just a rifle, but when I met with Ed and his wife Sue, I learned that the donated rifle had a scope, a padded gun case and even two boxes of factory loaded ammunition with it!

When I contacted Tom Wagner who is charge of the program, he said “awesome!” The rifle will be used as a loaner for veterans who do not own a firearm and have a hunt coming up this fall.

The AES receives big game tags from sportsmen who have drawn them, but for one reason or another, can’t go on the hunt.

Sportsmen donate the tags to AES and AES then finds a veteran who wants to go on that hunt and utilize that tag.

It is a win-win for both sportsmen, who can get their bonus points back, and for the deserving veterans who use them. The vets are taken on the hunts by volunteers at no cost.

I’ve done a number of these hunts/fishing trips for AES and it is one of the most personally rewarding things I do and enjoy.

While the AES doesn’t need anymore clothing, I’m sure they could use more donated firearms, especially rifles and shotguns.