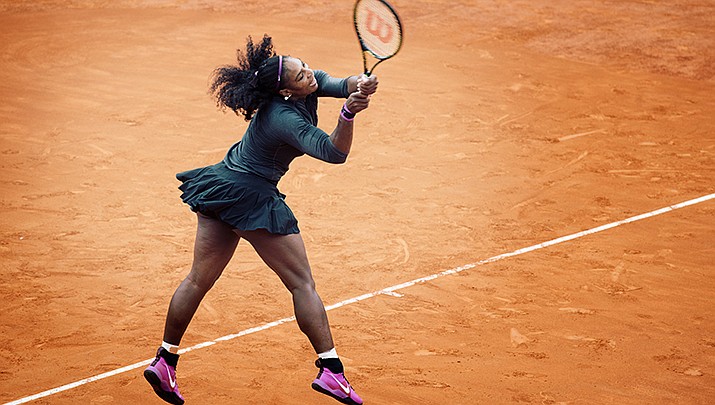 Long-time tennis star Serena Williams said she will be stepping away from the game after this year’s U.S. Open. (Wikimedia Commons, cc-by-sa-2.0)

NEW YORK - Serena Williams said it plainly: It isn’t really fair. A male athlete would never have to make the same choice.

But after a trailblazing career that both transformed and transcended her sport, Williams, who turns 41 next month, has told the world she’ll soon step away from tennis to focus on having a second child and making her daughter, Olympia, a big sister. Her explanation in a lengthy Vogue essay resonated with women in sports and well beyond, many of whom could relate only too well to her words, “Something’s got to give.” And to the idea that, no, you really can’t have it all — at least, not all at the same time.

Many noted that Williams’ achievements, which included winning a major when two months pregnant, had made her seem superhuman. But, said Sherie Randolph, even ordinary women are expected to seamlessly combine work and motherhood.

“Society makes women think they can have everything all at once — be the best hands-on-mom and at the top of the field,” said Randolph, a history professor at Georgia Tech and founder of a Black feminist think tank who's working on a book about African American mothers.

“But that just is not borne out in reality for most women,” she said. ”What ends up happening is that working mothers are just worn out and overworked trying to labor at the highest level of two demanding jobs — motherhood and their profession.” As if to prove her point, Randolph’s 4-year-old son constantly interrupted her thoughts about Williams’ decision as she tried to discuss them in a phone call.

In explaining how her daughter yearned to be a big sister, Williams noted she didn't want to be pregnant again as an athlete: “I need to be two feet into tennis or two feet out.”

“Believe me,” the 23-time Grand Slam champion also wrote, “I never wanted to have to choose between tennis and a family. I don't think it’s fair. If I were a guy I wouldn't be writing this because I’d be out there playing and winning while my wife was doing the physical labor of expanding our family."

"Maybe I’d be more of a Tom Brady if I had that opportunity," she added, a reference to the 45-year-old superstar quarterback who recently retired, then reversed his decision 40 days later.

Many women, discussing Williams' announcement, reflected on their own agonizing choices in the name of “having it all.”

“Even as a woman who sits at a desk, whose body is not taxed by the work at hand, I have felt that searing pulling apart of myself — towards my career, and towards my family,” said Jo McKinney, 57, a New York advertising executive.

“Now, looking back, I wish that every time I chose my family over my job ... it didn’t label me as unambitious,” she said. “I got goosebumps as I read Serena’s piece because she said what many of us feel and are afraid to voice: It’s not fair, and something’s got to give.”

Such dilemmas are exacerbated in sports, said Lisa Banks, a prominent Washington employment attorney specializing in both gender and sports cases.

“Having it all is a subjective thing,” she said. "You can have it all, but can you have it at the same time and the same level, if you’re going through pregnancies? No, you miss some time, you miss training. You’re necessarily at a disadvantage.”

The issue has been illustrated vividly in track and field. U.S. sprinters Allyson Felix and Alysia Montano became advocates for mothers when they split with Nike over contract clauses that reduced salaries when they became pregnant.

Four-time Olympic champion sprinter Sanya Richards-Ross retired after the 2016 Olympics before starting a family with her husband, former NFL defensive back Aaron Ross.

“I always knew I didn't want to start a family while I was still competing,” she said. “I feel being an athlete is the most selfish role you could have because it’s always all about you. Resting, recovering, training. Everything is so hyper-focused on the athlete. And being a parent is the opposite of that.”

Of Williams’ decision, she said, “I don’t want to say it’s unfair, but it's a harsh reality and harsh truth that as an elite female athlete, we definitely have to consider a lot of things our male counterparts don’t.”

Distance runner Kara Goucher, who also fought battles over pregnancy pay, said people are starting to acknowledge the issue, and careers are lasting longer. But she added: “You see the dad at the Super Bowl holding his kids. The reason he’s able to do that ... is because someone else is there taking care of their children. That’s not how it is for mothers.”

Like Williams when she won the Australian Open in 2017, beach volleyball player Kerri Walsh Jennings was newly pregnant when she won a gold medal in London in 2012.

“I think at some point, you gotta make that choice,” she said. “Ultimately it’s very clear that that clock is ticking. Usually, being a mama wins out.”

But Walsh Jennings expects Williams to keep building her legacy. (Williams has become a venture capitalist with her Serena Ventures, and is a fashion designer, among other things.) “She has earned the right to stop and breathe, and to grow her family,” she said.

Tennis legend Chris Evert, who won 18 Grand Slam singles titles, retired at 34 and started a family two years later. “The motherhood/tennis career subject is not one I experienced,” she said in an email message. “I wanted and chose to spend every second with my children. That was my choice but doesn’t mean it’s the right choice for everyone.

“As far as Serena, I think this is the right time,” Evert said. “She’s squeezed everything she could out of her game. ... She’s transcended tennis and become a leader on many important cultural, social and gender issues. She has lived an extraordinary life and will undoubtedly continue to crash the glass ceiling.”

One thing is clear: The U.S. Open, after which Williams strongly hinted she'll retire, will be a huge draw. Ticket sales were sharply up on Tuesday, said Kirsten Corio, chief commercial officer for the U.S. Tennis Association.

A mother of two herself, Corio said of Williams’ announcement that “the realization is a little bit crushing, that as a woman you can’t do both as an athlete at the top of your game.”

“It’s a lot of emotions to process, both as a fan of sports and of working moms,” she said. “The one emotion that I can boil it down to, really, is just gratitude.”

Dearica Hamby was also feeling gratitude. Williams, said the WNBA player for the Las Vegas Aces, has been “an example for a lot of us, especially mothers being able to compete at such a high level."

Still, Hamby, who like Williams has a daughter, 5-year-old Amaya, said the tennis star's call was a hard one — and it's a discussion she's been having a lot lately with coaches and players.