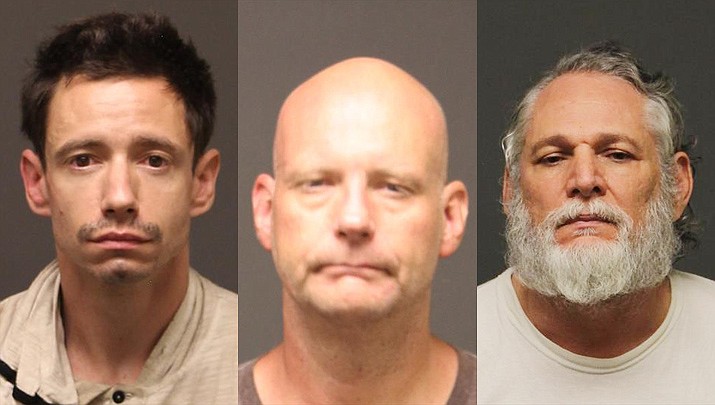 KINGMAN – Mohave County Sheriff’s Office deputies arrested three suspects of a home invasion and aggravated assault. Deputies said they pretended to be U.S. Marshals, according to an MCSO news release.

On Wednesday, Aug. 10 at approximately 5 a.m., deputies responded to the 600 block of Santa Maria Road in Golden Valley for a reported home invasion. It was reported that three subjects – Mark Hutchins Jr., 35, Jason Wortman, 46, and Humberto Perez, 60 – had come to the residence wearing camouflaged clothing and face masks, identifying themselves as being with the U.S. Marshal’s Service, and demanding entry into the residence.

The suspects then reportedly fled the scene. The two injured occupants were transported to Kingman Regional Medical Center by ambulance for blunt force trauma and possible broken bones. Both victims are expected to survive their injuries.

Detectives with MCSO responded and assumed the investigation, which led them to the 7900 block of Highway 68 where several subjects were contacted and interviewed. A search warrant was served on four different residences.

Two subjects, identified as Mark Hutchins Jr., 35, and Jason Wortman, 46, both of Golden Valley, were taken into custody during this time. The guns, bat, clothing and masks used during the incident were recovered, MCSO said. Detectives located the third suspect, identified as Humberto Perez, 60 of Golden Valley, in Las Vegas where he was taken into custody with the assistance of the FBI Criminal Apprehension Team.

The investigation by Detectives revealed that Perez had recently been served with an Order of Protection by one of the victims, his estranged wife, due to previous domestic violence issues and was removed from the Santa Maria residence approximately one month prior.

Prior to the Wednesday incident, Perez had allegedly enlisted the help of Hutchins and Wortman to go to his previous address to collect some property. According to law enforcement, Perez asked for help under the pretense that his estranged wife’s new boyfriend was allegedly physically abusing his handicapped son.

The men armed themselves and drove to the residence. Once at the home, Perez escorted his adult son to a back room. Perez then came out and allegedly began to strike both his estranged wife and her mother with the baseball bat. Both Wortman and Hutchins verbally and physically stopped Perez from continuing the assault and all three then fled the residence, according to law enforcement.